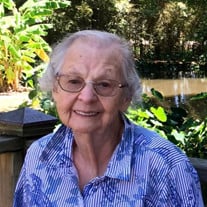 Long-time resident of Bayou Vista, LA and recent resident of Garland, TX, Alberta Blakeman completed her bonus days and entered into the presence of her Lord and Savior Jesus Christ early Sunday morning, September 25, 2016. She lived with her daughter and son-in-law, MaryAnn and Chuck Crossno since her move to Texas in August, 2013. Her care was lovingly shared by her daughter Becky and her granddaughter Hannah, who visited her daily, by her son John and her daughter-in-law Deb, who came and stayed with her every month, and more often when possible, and by her son Jim, who came to visit her every holiday that he was able to do so. Alberta leaves a smile in hearts and minds of all who knew and loved her. She is perhaps most famous for her smile that never left her, regardless of her pain or her circumstance. She will be long membered for her hospitality, for feeding anyone who crossed her doorstep, for rocking babies, for teaching children, for enjoying life, and for spreading joy. In her later years, she became an avid gardener. Over 1000 Easter lilies bloomed in her flower beds each spring, along with Louisiana Iris, Amaryllis, Jasmine, bird of paradise, shamrock, and many other delights. She always had fresh parsley and green onion growing for her gumbo and her white beans. No one could prepare better crab cakes, catfish, or fried shrimp. She filled three freezers with food that could not be bought – her magic ingredient was always love. She was a hard worker, refusing to stop until the job was done, known by her children as the “ever-ready bunny.” Her children often begged her to sit down and rest because it looked so bad when she was working after they were so tired, they had quit working! Born in the now abandoned community of Bayou Chene, LA and raised on a houseboat in Jeanerette Canal, Mom attended boarding school at Acadia Baptist Academy in Eunice, LA from the age of 13, where she worked, studied, and learned to play the piano. She was “adopted” by a Sunday School class from Shreveport, LA who paid her tuition to attend Louisiana College. She met James Blakeman, the love of her life at the First Baptist Church in Morgan City, LA, after accepting a dare from her sister-in-law that she could be the one gal in town who could catch the eye of the Marine just back from WWII. Met November 21, 1945 and married January 27, 1946. They both graduated from Mississippi College in Jackson, MS in 1952. She liked to say, “We finished with two degrees and two kids.” Alberta taught first grade for 38-1/2 years – she missed half a year in 1965 when she gave birth to Rebecca Denise in January. She taught at M.D. Shannon and Berwick Elementary Schools. She taught more than one generation in several families. She accepted Christ as her Savior as a young girl and was baptized around the age of eight. She read her Bible almost every day of her life. Alberta is survived by her children: • James M. Blakeman, Jr. and his wife Betty of Alvin, TX • MaryAnn Crossno and her husband Chuck of Garland, TX • John P. Blakeman and his wife Deb of Lakeway, TX • Becky Mechler and her husband Mark of Allen, TX • Grandchildren Lorri, Jerry, James, Brian, Byron, Sean, Sierra, Hannah and Blake • Great-Grandchildren Theresa, Bobby, Joseph, Katherine, Paul, Carson, Kate, Austin, Hadley, Caitlyn, Brennan, Leah, Zack, and newest Athens May. • She was preceded in death by her husband James, her brother Doyle, her granddaughter Barbie and her grandson Joseph. Alberta loved well and was well loved by many nieces and nephews, and their children and grandchildren. She will be interred with her husband James in Houston National Cemetary Section R, Grave 175. Visitation, Friday. September 30, 2016, 4:00 PM until 7:00 PM Funeral services Saturday, October 1, at 11 AM, followed by lunch. First Baptist Church, 502 S. Fifth Street Richmond TX

Long-time resident of Bayou Vista, LA and recent resident of Garland, TX, Alberta Blakeman completed her bonus days and entered into the presence of her Lord and Savior Jesus Christ early Sunday morning, September 25, 2016. She lived with her... View Obituary & Service Information

The family of Alberta Persilver Blakeman created this Life Tributes page to make it easy to share your memories.

Send flowers to the Blakeman family.