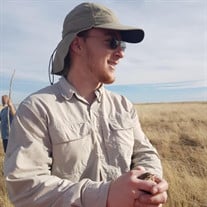 Alec D. Ritzell’s fascination with the natural world began when he was a toddler gleefully watching the moon. As he grew, his loves expanded to elephants, mammoths and mastodons—he could explain the difference by age 4—deer, fish, and birds. His life ended while he was a graduate student studying bobwhite quail. He was 25. Born in Denver in 1994, Alec grew up in Colorado and Texas with his beloved brother Nicolas, mother Jackie, and father Andrew Ritzell. Andrew predeceased him, as did his grandparents William Ritzell, of Hemphill, TX, and Ruth and Murray Monse, of Houston, TX. Alec had a history of beating long odds. At birth, he was a 4-lb. preemie who fit in the palm of his father’s hand. At age 24, he was a 210-lb. weightlifter. He started community college with developmental math classes. He graduated in 2017 with a 4.0 and a B. S. from Sul Ross State University in Alpine, before pursuing a master’s degree at Texas A&M – Kingsville. Alec was a superb student and dedicated worker, endearing himself to his professors and other students (except, perhaps, those peers who were angry that he’d blown the curve). His academic achievements enabled him to attain research assistantships and internships at the Borderlands Research Institute, the Noble Foundation, Rolling Plains Quail Research Foundation, and Caesar W. Kleberg Wildlife Research Institute. He also garnered many scholarships. Due to the generosity of these organizations and donors, Alec would have graduated with a minimal amount of student loans, an accomplishment that gave him great satisfaction. Alec had a beautiful singing voice, and was the King of Karaoke, especially when singing Johnny Cash tunes at the Railroad Blues bar in Alpine. And he loved to talk, usually on long telephone calls with family and friends. He had endless topics to discuss and fended off any attempt to end a call with the plea, “Just one more thing….” He loved the outdoors, whether walking alone in the hills behind his dorm at Sul Ross, hiking with “The Crew” in Big Bend National Park, hunting with his brother across Texas, or fishing at the Post in Marathon. Alec’s last fishing trip, in early June 2019, was with his brother Nic at Baffin Bay in South Texas, using the Kistler fishing rods his Grandpa Bill had given him. When Alec was diagnosed with glioblastoma a few weeks later, Alec’s family and friends were hopeful he would beat the odds once again. He fought with everything he had. He spent a month in neuro ICU, largely paralyzed, undergoing radiation and chemotherapy. By mid-September, he regained his ability to speak—and most importantly to Alec—eat. And eat he did, usually starting his day with salmon, cream cheese, caviar, and capers. Spurred by fond memories and too many hours watching the Food Network, his food “wish list” grew to many pages, leading his family to call him the “Man of Flavor.” The nickname “Master of Flirting” would have fit, too. On Alec’s first visit to Alpine in 2014, his Aunt Michelle had to bribe him to ask a young lady to dance. After that, he never looked back. Through multiple rounds of radiation, chemotherapy, and hospitalization, Alec flirted with his nurses, telling one “That mask can’t disguise how pretty you are.” Not that Alec was a player—far from it. He was genuinely guileless and utterly sincere. During Alec’s cancer treatment, Alec and Jackie lived with Uncle Clint and Aunt Lisa Harman in Houston. Jackie and Lisa were his constant caregivers for the next eight months. Despite his gains in fall 2019, Alec began struggling after Christmas, and was hospitalized repeatedly. An MRI in late February 2020 showed the spread of Alec’s cancer to his neck and spine. No further treatment being possible, his family moved him to Houston Hospice on March 5, where he died four days later, surrounded by family and friends. In addition to his mother Jackie (Austin, TX) and brother Nic (Dallas, TX), Alec’s survivors include his Uncle Mark Monse (Powderly, TX); Aunt Lisa Monse Harman and Uncle Clint Harman (Houston, TX); Aunt Michelle Monse (Dallas, TX); Uncle Eric Monse and Aunt Lisa Jo Monse (Rosharon, TX); and cousins David Monse, Caitlyn Mangun (and husband Bryce) (Dallas area), Kacey Hahn (and husband Josh), and Paul Harman (Houston area). The family is grateful that Jackie’s boyfriend Kevin Ham drove from Austin to Houston weekly throughout this ordeal to support Jackie, helping her shoulder this overwhelming burden. The family also wants to thank Nic’s girlfriend, Breanne Kurtz, for her steady and loving support. A few days before Alec’s death, the family pastor reminded Alec and the family that Christians do not say goodbye. We look forward to the day we will see him again. The family is grateful for the dedicated care that Alec received from so many, including his oncology team, the ambulance drivers who took him to treatment, his speech and physical therapists, and the compassionate nurses at Houston Hospice. Alec’s family will inter him privately in Houston in March and hold a celebration of his life in Alpine later this spring. (Date to be announced.) In lieu of flowers, anyone wishing to honor Alec may contribute to the Alec D. Ritzell Endowed Scholarship Fund at Sul Ross State University, the Caesar W. Kleberg Wildlife Research Institute, or a charity of your choice. Or just take a walk, listen to the birds, and praise God for Alec’s life and the natural world he loved. Alec D. Ritzell Endowed Scholarship Fund Attn: Kara O’Shaughnessy Sul Ross State University Office of Development & Alumni Relations SRSU Box C-114 Alpine, TX 79832 (Details of the scholarship are being finalized. Please contact Michelle Monse ([email protected]) before contributing to check on its status.) Caesar W. Kleberg Wildlife Research Institute Attn: Dr. Fidel Hernandez Texas A&M University – Kingsville 700 University Blvd., MSC 218 Kingsville, TX 78363

Alec D. Ritzell&#8217;s fascination with the natural world began when he was a toddler gleefully watching the moon. As he grew, his loves expanded to elephants, mammoths and mastodons&#8212;he could explain the difference by age 4&#8212;deer,... View Obituary & Service Information

The family of Alec D. Ritzell created this Life Tributes page to make it easy to share your memories.

Alec D. Ritzell’s fascination with the natural world began when...

Send flowers to the Ritzell family.