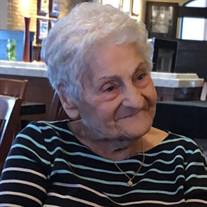 Alice Suzanne Iacobelli Gochenour, 92, of Houston passed away Saturday, October 10, 2020. Alice was born June 3, 1928 in Lebanon, Indiana to Rocco and Esther Iacobelli. She is survived by her sons; Jeffrey Alan Gochenour and wife Linda, Mark Edwin Gochenour and wife Ruth, Grandsons; Bryan, Chase, and Jordan, Sister in Law; Doris Iacobelli, Nephews; Dirk and bruce Iacobelli and families, Niece; Lynd Clary and family. Although her given name was Alice, to most she was known as Sue. She liked the lesser formality of that name and that was a trait she carried through life. No pretense, nothing complicated, just a warm loving individual to all with whom she came in contact . Her father, Rocco Iacobelli, was born in Italy and emigrated to the United States through Ellis Island as a young man. He served proudly in WW I and attained citizenship status. Rocco was tailor by trade and established a tailor shop in Lebanon, Indiana where he met his future wife, Esther. They raised three children. Fred,who served as a Lt. Commander in the United States Navy before retiring ,was the oldest. Joe Bill, who spent much of his early life as a golf pro, was the middle child. Sue was the youngest and only daughter. Growing up around two older brothers she became quite the tomboy which gave her the strength to carry her through many rough patches she encountered in life. Although this created an independence those who knew her would describe her as one of the most friendly, welcoming and socially available people they ever met. After attending college in Colorado, where she flew for the Civil Air Patrol during WWII, she returned to Lebanon, Indiana. While at the local airport attending to the Cessna she was piloting she met a young man from the nearby town of Frankfort, Indiana, Donald Gochenour. The two later married and remained together until his passing in 2012. They began to raise a family in Indianapolis, Indiana eventually living just blocks away from the Indianapolis 500 Speedway. Don and Sue enjoyed attending the 500 and always found time to tune in for the Memorial Day event. They also enjoyed the varied sporting events found around the communities where they lived. It was no wonder that sports influenced the youth of their children. Jeffrey Alan, the oldest and Mark Edwin. Later they moved from Indiana to New Jersey and eventually to Houston, Texas. At Don's side they were either coaching, assisting, being team parents, keeping score or driving their two sons or other players to and from events which later continued with their grandchildren. If you saw a Gochenour player at a sporting event Don and Sue were always found in the stands, on the sidelines, in the dugout or concession stands. Sue was also active in the PTA in New Jersey and served terms as PTA president. Sue worked as a principal's secretary at the grade school level in New Jersey and then again at the high school level at both Westchester High School and Stratford High School in Houston, Texas. She was not just the secretary, but became a listening ear, a source of support and was always looking out for the best interest of the students even if all they needed was a smiling face to start their day. After suffering from a degenerative wrist injury her ability to work as a secretary was no longer possible. She deeply missed her school “family”. As computers and software made their appearance in the 1980”s she was offered a job at West Houston Veterinary Medical Associates to transfer the files and medical records into a computer database for her son, Mark. Because of her decreased ability to rapidly type she was told she could take her time and work undisturbed in the back office. Well that didn't last long. With an environment filled with people and pets she was home. There was no way Sue could stay hidden in the back. Soon she greeted everyone and their pets at the front door. In time she knew all of their animals, the names of the clients, their children's names, and shared in all of their stories. She was always there to offer a friendly smile, an interest in their lives and at times a shoulder of support to cry on. Sue lived a full life during her 92 years. She found friends wherever she went and they found her. It can be said with all honesty that every person who crossed her path had their lives made better by knowing her and her life was made better at the same time.

The family of Alice Suzanne Iacobelli Gochenour created this Life Tributes page to make it easy to share your memories.

Send flowers to the Gochenour family.