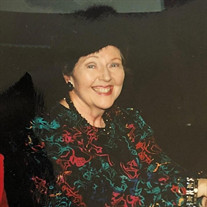 Ann Katherine Deming Bloxsom, beloved mother and grandmother, died peacefully in her sleep at her home, in Katy, TX, in the early evening of November 8, 2020. She was 89. Born at the start of the Great Depression in Fort Worth, Texas, Ann Bloxsom... View Obituary & Service Information

The family of Ann Katherine Deming Bloxsom created this Life Tributes page to make it easy to share your memories.

Send flowers to the Bloxsom family.