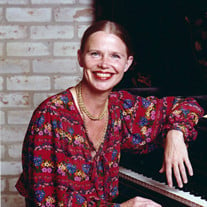 Ann Gardner Nicholl Chadwick died August 25, 2015. She was born November 1, 1935, in San Antonio, TX, to Amanda “Billie” and Herbert L. Nicholl. The family also lived in Lufkin, TX, and Beaumont, TX, before moving to Houston in 1945. Ann graduated from Lamar High School in 1953. As a popular senior at Lamar, she took a comprehensive examination given nationally by the National Honor Society and scored among the five highest in the state, receiving a Certificate of Merit. She was the only woman in Texas to receive this honor. Ann attended the University of Texas, where she was an outstanding student throughout her years of study and a member of Kappa Alpha Theta sorority. She graduated with a B.A. in Piano Performance in 1958. A gifted musician with a wide range of musical interests, Ann started out as a music teacher in the Houston Independent School District and sang in the choir at Christ Church Cathedral. In 1962, she went to Fontainbleau, France, to study classical piano with renowned teacher Madame Nadia Boulanger. After returning to Houston, Ann became a longtime Performing Member of the Tuesday Musical Club and was President of the Cambiata Soloists, a chamber group that performed unusual and contemporary music. She was also an active member of Young Audiences, performing educational music programs for children throughout Texas with singer and friend Hope Shiver. Ann performed many concerts over the years with her frequent duo-piano partner, Sharon Ley-Lietzow. The two of them played all of the music by memory. One of her favorites was a series of shows, called “Champagne and Gershwin,” which they performed in the early 1980s, together with the Texas Opera Theatre singers, as a fundraiser for that organization. A brilliant conversationalist and beloved friend of many, Ann radiated an extraordinary charisma, an incredible sense of personal style, and a true zest for life. She was also a champion tennis player, playing competitively and supporting the growing interest in the sport for women. She played numerous high-profile tournaments and won many trophies, including several from River Oaks Country Club. Above all, Ann was known for her love of the piano and her passion for performing. But she was also a great mentor to young pianists and other musicians. She hosted countless concerts, salon-style performances and musicales at her home, featuring up-and-coming young artists, established performers, or gathering some of her wide circle of friends to make music together. Ann is preceded in death by her parents; her husband, James H. Chadwick; her dear friend, Mermod Jaccard; and her brother-in-law, Charles, B. Headrick, M.D. She is survived by her sister, Dorthyle Nicholl Headrick; nephews, Dr. Charles Nicholl Headrick (Michelle) and Gardner Bishop Headrick (Sharon); nieces, Faith Ann Headrick White and Mary Amanda Headrick; several great nieces and nephews; and many dear friends. A celebration of Ann’s life will be scheduled at a later date.

The family of Ann Chadwick created this Life Tributes page to make it easy to share your memories.

Send flowers to the Chadwick family.