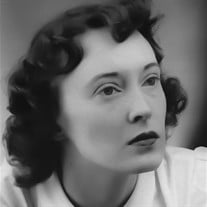 Anne Priscilla Barnetson Gilbride, 93, of Houston, Texas passed on to the house of Our Lord on Good Friday, April 14, 2017. Anne was born August 2, 1923 in Olean, New York to Frances Driscoll Barnetson and Alfred W. Barnetson. She and her two sisters, Mary and Nancy, grew up there where one of their favorite pastimes was hanging out at the soda fountain at their father's drug store. They spent the summers at their cabin on Cuba Lake, where Anne was an accomplished swimmer and could often be seen swimming the width of the lake. She was extremely proud of and not shy about sharing her feat of swimming the mile length of the lake. Ann attended school in Olean and graduated in the top of her class from Olean High School. She then ventured far from home (at the time) and attended college in Rochester, New York. Anne graduated from the University of Rochester, School of Nursing with honors in 1939 and fondly remembered her time in Rochester for the rest of her years. After graduation, Anne returned to work as an RN in Olean, NY. One afternoon in the Olean House restaurant, a favorite place for the young nurses to congregate after work, Anne had difficultly lighting a cigarette. James Gilbride (Jim) happened to be nearby and stepped forward with a lighter at hand and soon became the love of her life. Anne and Jim were married in Olean, New York on September 9, 1950. They led an exciting life, traveling the world with Jim's career at Dresser Industries and raising their five children along the way. They finally settled in Houston, Texas in 1974 where James retired and Anne spent the rest of her life. Anne was a devout Catholic and a member of St. Cecilia parish. She spent many hours volunteering for Charity Guild of Catholic Women, Magnificat Houses, Casa de Esperanza, and United Cerebral Palsy of Greater Houston. She also volunteered as a school nurse, Girl Scout leader, Homeroom Parent and Chaperone while her children attended St. Cecilia Day School. Anne was a Life Master Bridge player, instructor/coach and one of the founders of the West Houston Bridge group. She would often times play with multiple groups and she traveled the country playing in tournaments. She also enjoyed needlepoint tapestry and working with miniatures. Anne had a great sense of humor and a quick wit. She loved telling stories about her beloved husband Jim or adventures the family had while growing up. One of her favorite stories took place while the family was vacationing on the Italian Riviera. Jim was called away for business for the day, so Anne decided to go with him. They left the girls at the hotel with an assurance from the staff that they would be well taken care of. When Anne and Jim returned they were greeted with a very large bill that the girls had racked up ordering everything they wanted a la carte from the hotel's restaurant and poolside bar, even though all of their meals had been prepaid as part of a package deal. Anne is survived by her daughters Deborah Anne Brown and husband Mark of George West, TX, Sarah Ellen Radenheimer and husband Paul of Houston, TX, Jennifer Frances Gilbride and significant other Robert Hare of Albuquerque, NM, and Megan Patricia Gilbride. She is also survived by 6 grandchildren, Laura Frances Huston, James Henry Gilbride Brown, Ashley Elizabeth Morgan, Kristen Margaret Nichols, Anne Marie Eschberger, and Jesica Gilbride Radenheimer, and 8 great-grandchildren, Caeden Morgan, Michael Henry Morgan, Gage Morgan, Brendan Nichols, Preston Nichols, Caroline Nichols, Ella Eschberger, and Adeline Eschberger. Anne was preceded in death by her husband Jim, her sister Mary Barnetson Kane, her sister Nancy Barnetson, and her daughter Mary Elizabeth Gilbride. The Gilbride family will be present to receive friends Sunday, April 23, 2017 from 4:00 PM until 6:00 PM with a Scriptural Rosary beginning at 5:00 PM at Dettling Funeral Home, 14094 Memorial Dr., Houston, TX 77079. A Mass of Christian Burial will be celebrated on Monday, April 24, 2017 at 10:30 AM at St. Cecilia Catholic Church, 11720 Joan of Arc, Houston, TX 77024, followed by burial at Memorial Oaks Cemetery, 13001 Katy Freeway, Houston, TX 77079. For more information please contact Dettling Funeral Home at (281) 497-2121. The family would like to give a special thanks to the staff of Colonial Oaks Westchase and A Med Hospice. For those desiring, contributions may be made in Anne's memory to Magnificat Houses or Houston Food Bank.

Anne Priscilla Barnetson Gilbride, 93, of Houston, Texas passed on to the house of Our Lord on Good Friday, April 14, 2017. Anne was born August 2, 1923 in Olean, New York to Frances Driscoll Barnetson and Alfred W. Barnetson. She and her two... View Obituary & Service Information

The family of Anne Priscilla Barnetson Gilbride created this Life Tributes page to make it easy to share your memories.

Send flowers to the Gilbride family.