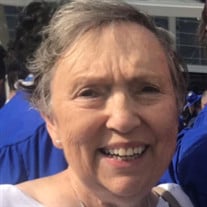 Annette Dorothy Jalayer (nee Goodreau) 79, of Houston, Texas, passed away on August 27, 2021. Annette was the beloved daughter of Donald “Moose” and Elizabeth Goodreau. The loving mother of Doryaneh (OJ) Howell of College Station, TX and Andisheh Collins of Houston, Texas. Loving sister of Patrick (Kay) Goodreau of L’Anse, Michigan, Grace Sepic of San Antonio, Texas, and BJ (Payman) Homayouni of Cedarburg, Wisconsin. She is survived by five grandchildren, two great grandchildren, five nieces and nephews, her precious kitty, Philby, and numerous relatives and friends. She is preceded in death by both parents, her brother, Michael Goodreau, and grandson, Kolten Howell and numerous aunts and uncles. Annette grew up in L’Anse, Michigan and graduated from L’Anse High School in 1959. In 1963, she graduated from St. Joseph Hospital School of Nursing in Hancock, Michigan and got her Michigan Nursing license. She moved to Houston, Texas and in 1965 got her Texas Nursing license. On July 7, 1966, she married Houtan Jalayer at a ceremony at the University of Houston. She would move with her husband to Tehran, Iran where their first daughter, Doryaneh, was born. After several years in Iran, in 1970, they would return to the United States and live a short time in L’Anse, Michigan, where she gave birth to her second daughter, Andisheh. They would eventually return to Houston, Texas, where she would remain for the rest of her life. Annette’s successful nursing career spanned over 52 years and encompassed many facets of the medical field. She worked for such prestigious organizations like Harper Hospital in Detroit, Baylor College of Medicine, Herman Hospital, Diagnostic Clinic of Houston, Hopestar Orthopedics, Methodist Hospital, St. Luke’s Hospital as well as in various private medical practices throughout her career. She retired as a Senior Research Nurse in 2015 from State of Texas, The University of Texas MD Anderson Cancer Center – Leukemia. Over her career she received many awards and accolades including the Brown Foundation “Outstanding Nurse-Oncologist Award” in 2013. Annette loved spending time in the kitchen creating delicious food for her family. In the 1970s she was recognized in the Houston Chronical newspaper for her skillful mastering of Persian cuisine. She had a life-long love affair with learning about everything. She excelled at sewing, woodworking, crocheting, knitting, beading, jewelry making, ceramics and many, many more different types of crafts. She loved her book club, Silver Sneakers, her church, and she was a master gardener. Her skilled hands were rarely still. In her 79 years, Annette taught her friends and family many things. She generously gave of her time to all thing’s family and friends. She was the go-to person for everyone to cure our ills, to provide expert advice, how to raise our children, and to lend an ear. She was an avid cheerleader for her grandchildren, great grandchildren, nieces, and nephews, supporting all their extracurricular activities. She was the best mom, the best sister, and the best life-long friend to Gladys Holloman. We will miss her wit and humor, her cheerful disposition, her loyalty, and most of all her company. She lived the words from her high school yearbook quote, “No problem too large, no favor too small, a willing hand for all.” As an expression of sympathy, memorial donations may be made to the American Cancer Society at www.donate3.cancer.org in her name.

The family of Annette Dorothy Jalayer created this Life Tributes page to make it easy to share your memories.

Send flowers to the Jalayer family.