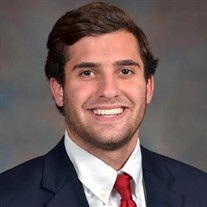 Anthony “Tony” Robert Brown, age 24, is now at peace with his loving God. Tony was called home on Sunday, April 15th, 2018, while surrounded by his family. He was born on October 21st, 1993, in Washington, D.C., to Jeannette (Zoda) and James “Jim” Brown. Tony was a 2012 graduate of Mills E. Godwin High School in Richmond, Virginia, where he was an avid athlete. He was also a 2016 graduate of the Mays Business School at Texas A&M University, where he was a member of the Kappa Alpha Order. He worked as a contract accountant with Occidental Petroleum, a job Tony was very proud of. Tony is survived by his beloved parents, Jeannette and Jim Brown, his brother Steven Brown whom he always looked up to, his “favorite” sister-in-law Lindsey (Sullivan) Brown, and his nephew and Godson Barrett Rocco Brown who Tony dearly loved. Tony is also survived by his grandparents Barbara (Fuller) and Merlin Brown of Kingman, Arizona, and Gloria (Arees) and Nicholas Zoda of Nanuet, New York, along with many aunts, uncles, cousins, extended family, Kappa Alpha brothers, and innumerable friends. Tony truly lived life to the fullest, and he never met a stranger. From a young age Tony loved watching and playing sports, and his highly competitive nature and athletic gifts were outstanding. His philanthropic nature greatly impacted his community, as Tony was an Eagle Scout and involved in many various service organizations. Tony loved spending time with family and friends, and was so proud of his nephew whom he called by his middle name “Rocco”. Tony had an uncanny ability to reach people in a deep and positive way, and his infectious smile will be missed by all who knew him. His family will always remember how Tony never left a conversation without telling them how much he loved them. We are greatly comforted by the knowledge that Tony’s legacy will be continued, as he will impact over seventy people as an organ donor. Family, friends, and others whose lives Tony touched are invited to a memorial service at Dettling Funeral Home, 14094 Memorial Drive, Houston TX 77079 from 6 p.m.-8 p.m. on Thursday April 19th, 2018 to reminisce and share stories about Tony’s wonderful life. The funeral Mass will be held at St. John Vianney Catholic Church, 625 Nottingham Oaks Trail, Houston TX 77079 on Friday, April 20th, 2018 at 10:30am in the Ars Chapel. There will be a reception following the service. Tony will also be remembered at the Houston and Richmond, Virginia Aggie Muster Roll Calls this Saturday. Aggies, please join us to say “Here” for our friend at the Bayou City Event Center from 10am-12pm. There will be a memorial service held in Richmond, Virginia at a later date.

The family of Anthony Robert "Tony" Brown created this Life Tributes page to make it easy to share your memories.

Send flowers to the Brown family.