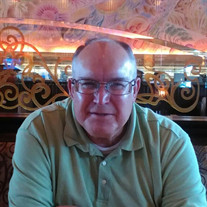 Anthony Butschek, 62, of Houston, Texas, entered the gates of Heaven on Friday, November 3, 2017, surrounded by his wife and loved ones at home. He bravely battled cancer armed with a sense of humor and an unwavering sense of faith. Anthony was born on May 17, 1955 to John and Mary Butschek of Hallettsville, TX. He attended school in Hallettsville and graduated from Mendenhall High School. Anthony attended Mississippi State University before joining the Navy. He proudly served his country aboard the USS Coral Sea. Anthony was an avid Texas Longhorns and Dallas Cowboys fan and could be found spending his weekends armchair coaching and cheering them on. He was a member of St. John Vianney Catholic Church and a 3rd degree member of the Knights of Columbus, Memorial Council #6527. Anthony married the love of his life, Martha on October 18, 2014. They packed a lot of love, laughter and memories in their short time together. They could often be found traveling with friends, eating dinner at the local Mexican restaurant, attending church and cheering on their great nephews at sporting events and FFA animal shows. Anthony was affectionately known as Big Tex to his grandson, Ivan, whom he loved spending time with. Anthony is preceded in death by his mother, Mary Butschek. He is survived by his wife, Martha Sailers Butschek of Houston, TX; step-daughter, Taylor Gibson Sailers & fiancé, Leandro Serano and their son, Ivan, of Houston, TX; step-sons, Jason Sailers & wife Georgia of Atlanta, GA, Josh Sailers & wife Julie and thier daughter Sophia Sailers, of Atlanta, GA. Anthony also leaves behind his father, John Butschek of Hallettsville, TX; sisters, Diane Rehmke and husband Fred of Lewisville, TX, Joan Davis and husband Dr. Keith Davis of Hattiesburg, MS, Rosemary Vorpahl & husband Doug of Katy, TX; brothers, Kenneth Butschek & wife Theresa of Hallettsville,TX, Michael Butschek & wife Ginney of Roundrock, TX, Kevin Butschek & wife Shelle of New Braunsfels, TX, Richard Butschek & wife Christine of San Antonio, TX, David Butschek & wife Elizabeth of Moulton, TX, as well as numerous, nieces, nephews and great nieces and nephews. Anthony was deeply loved by his many friends in the church and community. He will be missed. The family will receive visitors on Thursday, November 9, 2017 from 6 PM until 8 PM with a Vigil to begin at 7 PM at Dettling Funeral Home, 14094 Memorial Dr., Houston, TX 77079. Anthony’s life will be celebrated at a funeral mass at St. John Vianney Catholic Church on Friday, November 10, 2017 at 10:30 AM. He will be laid to rest at the VA Houston National Cemetery at 1 PM following Holy Mass.

Anthony Butschek, 62, of Houston, Texas, entered the gates of Heaven on Friday, November 3, 2017, surrounded by his wife and loved ones at home. He bravely battled cancer armed with a sense of humor and an unwavering sense of faith. Anthony... View Obituary & Service Information

The family of Anthony Butschek created this Life Tributes page to make it easy to share your memories.

Anthony Butschek, 62, of Houston, Texas, entered the gates of...

Send flowers to the Butschek family.