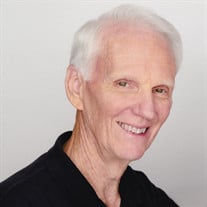 Tony Hughes passed away peacefully on July 7, 2018 in Houston TX. Tony was born on November 30, 1940 in Darby, Pennsylvania to Joe and Helen Hughes. He earned his undergraduate degree from Saint Joseph’s University and his master’s degree from Temple University and spent his career working in the human resources industry for various companies in Pennsylvania, New Jersey, Connecticut and Massachusetts. In his later years Tony began his second career teaching classes at universities in Boston, Philadelphia and Houston which he enjoyed very much. He was one of the first professors hired by the University of Phoenix when they opened a campus in Houston. For his entire life Tony loved painting as a hobby and he took classes and was a skilled painter in oils, water colors, and acrylics. Over the years Tony gave away many paintings as gifts to family members and friends and was always happy to create a painting for someone who requested one from a favorite photograph that they had. He enjoyed many wonderful trips with his wife Kathy as well as activities with his grandchildren. He was a friend of Bill for over 22 years. Tony was a beloved member of the community at Colonial Oaks in Houston, TX where he lived for the past two years. Tony is survived by his loving wife of 54 years, Kathy, and his children Chris Hughes of Johns Creek GA, Marianne Hughes of Mansfield, MA, Kathleen Lyttleton, of Cypress TX, and Paul Hughes of Los Angeles, CA. In addition he is survived by his seven grandchildren, Colin, Lindsey & Meghan Hughes, Alyson and Anthony Jr Centrella and Jackson & Griffin Lyttleton. Tony is also survived by his sisters Kathleen McCollum of North Port, FL and Mary Ellen Aicher of Berlin, NJ, and many nieces and nephews. Tony was preceded in death by his parents Joe & Helen Hughes and his brother Joe Hughes. The family will welcome visitors on Monday, July 16 from 6PM to 8PM at the Dettling Funeral Home located at 14094 Memorial Drive, Houston, TX 77079. There will be a funeral mass on Tuesday, July 17 at 10.30AM at St. John Vianney Church located at 625 Nottingham Oaks Trail, Houston, TX 77079 and a reception to follow. Following the reception, a committal service will take place at the Immaculate Conception Cemetery in Sealy Texas. In lieu of flowers the family requests that a donation be made to The Council on Recovery online at www.councilonrecovery.org.

Tony Hughes passed away peacefully on July 7, 2018 in Houston TX. Tony was born on November 30, 1940 in Darby, Pennsylvania to Joe and Helen Hughes. He earned his undergraduate degree from Saint Joseph&#8217;s University and his master&#8217;s... View Obituary & Service Information

The family of Anthony Christopher (Tony) Hughes created this Life Tributes page to make it easy to share your memories.

Tony Hughes passed away peacefully on July 7, 2018 in Houston...

Send flowers to the Hughes family.