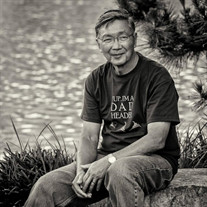 DR. ARTURO DOMINGO IMPERIAL went peacefully to be with the Lord on January 25, 2021 a the age of 82, after his battle with Parkinson’s disease, with his devoted and loving wife of 54 years by his side. He is preceded in death by his eldest grandson Josh Imperial, his parents Dr. Juanito and Felisa Imperial, and sister Myrna. He is survived by his wife, Dr. Josefina Imperial; sisters, Olive Obach, Gladys Garcilliano; children, Archie Imperial and his wife Carol of Austin, Mary Jo Harp and her husband Alan of Houston, Chris Imperial and his wife Becky of Bryan, Franco Imperial and his wife Wisa of San Jose, CA, David Imperial of Houston; and 15 grandchildren who brought him so much joy. Art was born in Iligan, Philippines on June 6, 1938. He graduated from high school with honors and then went to Manila for his undergraduate and medical school at the University of Santo Tomas. He came to the United States in 1964 for his surgical residency at Harper Hospital in Detroit, Michigan followed by his hand surgery fellowship at Grace Hospital. Art and Nina married in Detroit and had their 5 children. In 1974, he moved his family to Lake Jackson, Texas to join Dr. Anselmo Unite to open the Brazosport Surgical Clinic, a hand and general surgery practice, where he worked for 26 years. He became an integral part of the Lake Jackson community through his surgical practice, his involvement at St. Michael’s parish as a member of the Knights of Columbus, and the Brazosport Daylily Society. Art worked hard to provide for his family, encouraging his children to do the same. He valued family time through the many road trips and vacations they took, even though every road trip included a stop at a nursery to purchase plants to add to their already full van. He had many hobbies over the years, including cycling, tennis, racquetball, classical music, and piano. He and Nina loved going to the Houston Symphony and Houston Grand Opera. Art retired from his practice in 2000 and devoted himself to his ultimate hobby of gardening. With lots of loving care and expertise, he turned his 3 acre home on the lake into a showcase garden with the help of his garden assistant, Alfredo, who became a devoted and close friend. Art even learned how to speak Spanish fluently so they could communicate. In 2008, the National Daylily Convention featured his gardens at their annual tour as growers from across the country visited the property and enjoyed his amazing labor of love. He also hosted other regional tours. He began to hybridize daylilies, creating hundreds of new cultivars. He won numerous awards exhibiting his daylilies in flower shows, including several Best in Show awards. Art generously shared his daylilies and expertise. Our family wishes to express their appreciation to Art’s amazing caregivers from A+ Agency and Compassionate Hospice Care who so lovingly cared for him. There will be a private mass at The Cathedral of Our Lady of Walsingham Catholic Church in Houston on Friday, February 5th with a reception in Lake Jackson at a later time. In lieu of flowers, donations may be made to: Brazosport Daylily Society, c/o Gary Gantt, 226 N. Amherst Dr., West Columbia, TX 77486; St. Michael’s Catholic Church, 100 Oak Drive South, LakeJackson, TX 77566; or the organization of your choice.

DR. ARTURO DOMINGO IMPERIAL went peacefully to be with the Lord on January 25, 2021 a the age of 82, after his battle with Parkinson&#8217;s disease, with his devoted and loving wife of 54 years by his side. He is preceded in death by his eldest... View Obituary & Service Information

The family of Dr. Arturo Domingo Imperial created this Life Tributes page to make it easy to share your memories.

DR. ARTURO DOMINGO IMPERIAL went peacefully to be with the Lord...

Send flowers to the Imperial family.