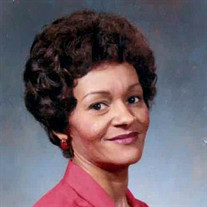 Born in Cecilia, LA on September 16, 1942, Audrey was the 6th of seven girls born to George and Lucille Zeno. She had a normal childhood and excelled in school at a young age. One of her early goals growing up was to be a teacher, and to help children in the special education department. She received her degree in Elementary Education from McNeese State University in 1972 and taught for 28 years in the Calcasieu Parish school system in or near Lake Charles, LA and retired with no regrets to her many years of service in that profession. Along with being special education teacher, she was a member of Zeta Phi Beta sorority, a beloved sister and aunt, and most importantly a wonderful mother. She met and married Patrick J. Potier in the early 1960’s and became a mother to 3 kids over the next 7 years. One of her greatest joys was being actively involved in each of her kid’s lives, especially the special time she spent with the youngest of her kids and only daughter, Colette. Between the 3 kids, there were always extracurricular activities that needed to be prepared for and attended on a weekly basis. Both Audrey and Patrick were at every practice, game, and recital that their time allowed and never complained. They realized that being involved early in their kid’s lives, helped to build character, integrity and an overall well-rounded person for the betterment of society. In her immediate family, she is preceded in death by her beloved daughter, Colette Potier, her parents, George and Lucille Zeno, and her sisters Hazell, Ezola, Mazell, and Geraldine. She is survived in death by her two sons, Brian and Marcus, her grandkids, Aungenae, Aundreana, Kayla, and Patrick J. Potier II, her great-grandchildren, Liam and Charlotte, her sisters Corinne and Maudrey, and many nieces and nephews, who all held a special place in her heart. The Potier family will be present to receive friends Wednesday, April 10, 2019 from 6:00 until 8:00 PM with a Vigil Service at 7:00 PM at Dettling Funeral Home, 14094 Memorial Dr., Houston, TX 77079. The Funeral Mass will be held Thursday, April 11, 2019 at 2:00 PM at St. Cyril of Alexandria Catholic Church, 10503 Westheimer Rd., Houston, TX 77042.

Born in Cecilia, LA on September 16, 1942, Audrey was the 6th of seven girls born to George and Lucille Zeno. She had a normal childhood and excelled in school at a young age. One of her early goals growing up was to be a teacher, and to help... View Obituary & Service Information

The family of Audrey Potier created this Life Tributes page to make it easy to share your memories.

Send flowers to the Potier family.