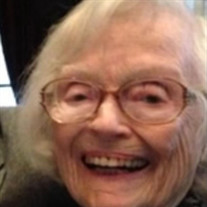 Barbara Jean Mann Bogan was born to Thomas Wesley Mann and Ruth Duncan Mann on October 31st, 1922, on a clear, fair-weather day in Chicago, Illinois. She passed away on November 7th, exactly one week after her 98th birthday. An only child raised primarily by her mother and a beloved elder cousin in Hollywood, California, Barbara attended Berkeley Hall, a private girl’s school in Beverly Hills, where she was known for her music, writing, and her performances in the school theatre. At age fourteen she met the love of her life, Lewis Frederick Bogan, to whom she was forever singularly, and unwaveringly devoted. After graduating from high school, Barbara attended George Pepperdine College where she studied dramatic arts and Spanish. On June 9th, 1943 she married Lewis in Annapolis, Maryland, where he had recently graduated from the U.S. Naval Academy and was poised to deploy to the South Pacific in the middle of World War II. Barbara spent the next forty-two years as a devoted military spouse, living in Florida, California, Arizona, Virginia, Maryland, Hawaii, and Saudi Arabia, often with her two sons, Lewis Frederick Bogan Jr., and Robert Lawrence Bogan. Her passion for music, theatre, and dance significantly influenced her children and her grandchildren’s interests in the subjects. When they lived in La Jolla, California, she chaperoned cotillions, and played an active role in her boys’ theatre productions. She designed the sets, described by the local newspaper as “imaginative”, and made the colorful costumes. In addition to being an avid bridge player and hostess, Barbara was a world traveler. Always intrepid, in her retirement she traversed the United States in a large Lincoln town car, climbed into a hot air balloon with two of her granddaughters, went white-water rafting, visited (and often drove across) most of Europe, Eastern Europe, Russia, China, Australia, South America, and the Middle East. She loved to spend time on any kind of boat, saying she was happiest on the water where she felt most connected to her beloved Lewis, who had been a captain in the Navy. Barbara enjoyed viewing wildlife and was especially taken with Koalas in Australia and the pink dolphins she encountered on a trip up the Amazon river. A prolific writer with a keen eye for grammar and propriety, Barbara exchanged letters with Lewis, many friends, and her grandchildren, and would often edit their notes back to her, as she shared stories of her travels, family, and friendships. Before his passing in 1985, she and Lewis frequently hosted their grandchildren at their home in Texas, complete with itineraries for the visit’s activities, various educational opportunities, and new culinary delights, as she was an excellent cook. Intimidated by no one, Barbara’s fearlessness, commitment to serving the country, and her sense of adventure were matched only by her sharp wit, feistiness, intelligence, and her vivid storytelling. She is survived by her son Lewis Bogan of Bakersfield, California, her son Robert Bogan and his wife Susan Schreiber of Oakland NJ, grandchildren: Delissa and her husband Brian Fulce, Landon and his wife Amy Ostrovsky Bogan, Desiree Bogan, Leisel Bogan, Lindsey Bogan and her husband Samuel Scriven, and Liam and his wife Lindsay Friesan Bogan, and her great-grandchildren: Lucas and Annalea Fulce, Clayton, Dylan, and Ainsley Bogan, Weston and Isla Scriven, and James Bogan.

Barbara Jean Mann Bogan was born to Thomas Wesley Mann and Ruth Duncan Mann on October 31st, 1922, on a clear, fair-weather day in Chicago, Illinois. She passed away on November 7th, exactly one week after her 98th birthday. An only child raised... View Obituary & Service Information

The family of Barbara Jean Mann Bogan created this Life Tributes page to make it easy to share your memories.

Send flowers to the Bogan family.