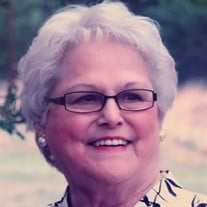 Barbara McMinn Dale, 87, of Houston, passed away March 24, 2022 with her family by her side. Barbara was born January 25, 1935 in Abilene, Texas to Jessie Oliver and Elsie Mabel Renfro McMinn. She is preceded in death by her parents, her brother William G. McMinn and nephew Kevin McMinn. Barbara is survived by her husband of 65 years, James Cary Dale; children and spouses, Debbie and Jim Paylor, Dana and Lou Garcia, and David Dale; grandchildren and spouses, Bryson and Lynsie Paylor, Suzanne and Steven Miller, and Devon and Grace Iorio Brewer, and great-grandchildren Blake Cary Barnes, Tate Yardley, Ava Paylor and Mitchell James Brewer. She is also survived by her sister-in-law Joan McMinn; nieces and spouses Tracey McMinn and David Purcell, Lisa and Ken Frayser, Cara Richardson and Patty Outten, and Whitney Quick. She will be missed by her many other family members and friends. Barbara graduated from Abilene High School in 1953 and attended Baylor University where she met and married James Cary Dale on March 10, 1957 while he was attending Baylor Law School. She became his companion, lover, and most of all his best friend for more than 65 years. During those years, she engineered some 20 moves following Jim's career with Humble Oil and Refining Company (now Exxon Mobil Corporation) from Houston to Midland, to New York City area twice, to England, to Sydney, Australia, and Houston five times where they retired in 2000. She explored most of the world and toured with company visitors in the major cities of Europe. She had a great spirit of adventure. She was never lost. She said, “only exploring.” Barbara loved people. She volunteered for a short while at MD Anderson Cancer Center but found her volunteer home at the Houston Children’s Museum and was named Volunteer of the Year for the countless hours she “lived” there. Her next great joy was graduating from clown school and leading the clown ministry at her beloved Memorial Drive United Methodist Church. She brought a lot of love and smiles as “Toots” to residents in nursing facilities and children in west Houston. She loved being with and helping people which brought her an abundance of satisfaction. This led to her last volunteer position as the morning receptionist at MDUMC. Her involvement in other activities at her church are too numerous to mention. Most people whose path she crossed will never forget her. A celebration of Barbara’s life will be held Saturday, April 9, 2022 at 1:00pm at Memorial Drive United Methodist Church, 12955 Memorial Drive Houston, TX 77079 with the Rev. Dr. Charles B. Simmons officiating. Reception to follow in Wesley Hall. You can livestream Barbara’s service by following this link https://www.mdumc.org/barbaradale. In lieu of customary remembrances, please consider a charitable contribution in Barbara’s memory to Memorial Drive United Methodist Church or the charity of your choice.

Barbara McMinn Dale, 87, of Houston, passed away March 24, 2022 with her family by her side. Barbara was born January 25, 1935 in Abilene, Texas to Jessie Oliver and Elsie Mabel Renfro McMinn. She is preceded in death by her parents, her brother... View Obituary & Service Information

You can livestream Barbara’s service by following this link https://www.mdumc.org/barbaradale

Send flowers to the Dale family.