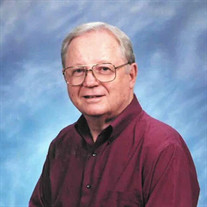 Bernard James Pankratz, age 91, of Houston passed away April 24th, 2020. Bernard was born on February 20, 1929 in Chesterville, Ontario, Canada to Bernard and Hilda Pankratz. He is preceded in death by his parents, his sister Marge, and his brother Bill. He is survived by his wife, Virginia, of 67 years of marriage and their 3 sons: Jon Pankratz, his wife Marilee (Fredricksburg, Tx); Greg Pankratz, his wife Janet (Katy, Tx), and their sons Mike, his wife Trishia, and their son Ethan, daughter Emerson and niece Angelica; Brian, and his wife Megan, and their daughters Kate, Ava, Julia and Lucy; Stephen, his wife Cayli, and their sons Judah and Ezra; and Dan Pankratz (Sugarland, Tx); two brothers Bob Pankratz and Dan Pankratz, and his wife Barbara; as well as numerous cousins, nieces, nephews, and friends. Bernard‘s formative years were spent in Valders, Wisconsin before moving to Burlington, Wisconsin where he attended and graduated from Burlington High School in 1947. He went to Wisconsin Tech for 1 year and then he was drafted into the army. He did his basic training at Camp Chaffee Arkansas. He entered OCS in March 1952 and was commissioned as a Second Lieutenant on August 8th, 1952. From there he served at Fort Riley, Kansas in the 10th Infantry Division. After being honorably discharged, he attended New Mexico School of Mines and Technology in Socorro, New Mexico and graduated in 1957 with a Bachelor’s Degree in Petroleum Engineering. He joined Gulf Oil Corporation in June 1958 and progressed up through the company over the years. He was active in the Society of Petroleum Engineers and was the Chairman of Permian Basin Section for the years 1973-74. He retired from Gulf after 27 years, at that time working as Manager of Engineering and Economics at Gulf’s Houston Headquarters. Bernard enjoyed helping others and for 23 years served at the Good Shepherd Mission in Huntsville, Texas. He was active in various church organizations, Knights of Columbus, Finance Committees, Parish Councils and RCIA. Some of his favorites: Whataburger, jelly beans, chili rellenos, a good steak (no sand), making egg-in-a-hole breakfast for family, Lazyboys, NCIS, Westerns, dry martinis, Boots Randolf music, golfing, Ginny’s cooking, any form of car racing, Janet’s pretzels, jitterbugging (in younger days), yard work, fishing, and sharing hugs and his jelly beans with grandchildren and great-grandchildren at every chance. He was always quite proud of the 3 sons he and Ginny raised. The Memorial Service will be held Friday, May 29, 2020 at 10:30 am at St. John Vianney Catholic Church, 625 Nottingham Oaks Trail Houston, Texas 77079. Following the service the family will have a private burial at Houston National Cemetery at 1:30. In lieu of flowers, the family would appreciate donations to the American Heart Association (www.heart.org) or the Alzheimer’s Association (www.alz.org).

Bernard James Pankratz, age 91, of Houston passed away April 24th, 2020. Bernard was born on February 20, 1929 in Chesterville, Ontario, Canada to Bernard and Hilda Pankratz. He is preceded in death by his parents, his sister Marge, and his... View Obituary & Service Information

The family of Bernard James Pankratz created this Life Tributes page to make it easy to share your memories.

Send flowers to the Pankratz family.