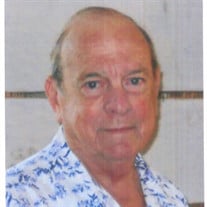 Bill Davidson, 74, of Houston passed away Friday, September 25, 2015 surrounded by his loving family after a 10 year battle with Multiple Myeloma; a disease that took his life, but not his spirit. Bill was born to Charles and Cora Davidson in Shawnee, Oklahoma. He is preceded in death by his parents and an infant daughter, Mary Jo. Bill is survived by his loving wife of 53 years, Ellen Davidson; children, Bill Davidson, Jr. & wife Lynda, Stephen Davidson & wife Malena, Heather Davidson Merrill & husband Troy; grandchildren, Christopher Merrill, Courtney Merrill, Isabella Davidson, Collin Merrill, Sarah Davidson, Stephen Davidson, Jaden Davidson as well as many extended family members and dear friends. Bill was a man with a heart of gold; an incredibly selfless person always most concerned with others. He spent his career in the office supply and printing industry where he owned Champion Stationery and Printing. He also spent many years in the engineering and petrochemical industries in business development and sales. He was an avid outdoorsman who enjoyed hunting, fishing, skiing and cycling. After retirement he spent most of his time with his family that he adored. Bill took up painting later in life, and before his death, painted portraits of his 7 grandchildren. He started a lending library for his grandchildren that will live on for years to come. Bill was an active member of St. John Vianney Catholic Church where he was instrumental in re-vitalizing the Scouting program, a program that now flourishes in the parish. A Funeral Mass celebrating Bill’s life will be held Wednesday, September 30, 2015 at 10:30 AM at St. John Vianney Catholic Church, 625 Nottingham Oaks Trail, Houston, TX 77079. A reception will follow Holy Mass on the church grounds. In lieu of flowers, please consider contributions in Bill’s memory to MD Anderson Cancer Center at www.mdanderson.org.

Bill Davidson, 74, of Houston passed away Friday, September 25, 2015 surrounded by his loving family after a 10 year battle with Multiple Myeloma; a disease that took his life, but not his spirit. Bill was born to Charles and Cora Davidson... View Obituary & Service Information

The family of Bill Davidson created this Life Tributes page to make it easy to share your memories.

Send flowers to the Davidson family.