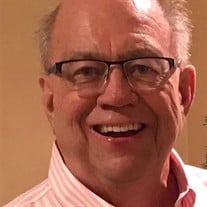 Bill Jackson, 71, passed away Tuesday, July 9, 2019, in Houston, Texas. Bill was born August 8, 1947, in St. Louis, MO to Donn Jackson and Judith Gleanzer Jackson. He is survived by his wife of 13 years, Trish Jackson; children, Chris Jackson & wife Amy (Austin, Texas) and Whitney Jackson Vanderslice & husband Phil (Houston, Texas); grandchildren, Sarah Jackson, Abby Jackson, Blake Alison Vanderslice, Brooks Vanderslice. Additional survivors include Patty Hall Jackson, Houston, Texas and numerous extended family in North Carolina, California and Kansas City as well as his beloved Goldendoodle, Wally Olivia Jackson. Bill grew up in Kansas City where he attended Shawnee Mission East High School and the University of Kansas where he was a member of Sigma Phi Epsilon. Bill began his career in Chicago in the 1970s and moved to Houston in 1984. He was active with Stratford High School Booster Clubs and the Nottingham Forest community. After working in manufacturing sales businesses, he began Screener King in 2001 in California. Because of his leadership, his company continues to thrive to this day. Bill enjoyed playing golf, watching College football, and reading. He also loved history and art. To his family and friends, he was larger than life, a man with a wonderful sense of humor and wit. Bill was loved by those who knew him and will be greatly missed. A Memorial Service celebrating Bill’s life will be held Monday, July 22, 2019, at 11:00 AM at Memorial Drive United Methodist Church, 12955 Memorial Dr., Houston, TX 77079. A reception will follow services on the church campus. Also, Bill loved color, please wear your favorite bright color to celebrate his life. In memory of Donn William Jackson, contributions may be made to MD Anderson Cancer Center, P.O. Box 4486, Houston, TX 77210-4486 or www.mdanderson.org/gifts .

The family of Bill Jackson created this Life Tributes page to make it easy to share your memories.

Send flowers to the Jackson family.