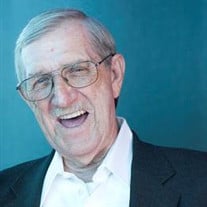 Bobby Roland “Bob” Blankenship was born September 1, 1930, in West Monroe, LA, and died September 18, 2018, surrounded by his family at home in Houston, TX. Bob was a beloved husband, father, grandfather and great grandfather. He was very proud of his family including all of his dogs over the years. He is survived by his wife of 42 years, Ann Blankenship, his daughters and their spouses, Margaret “Margie” and E. Lee Hammett, Jr., of Baton Rouge, LA, Robyn Jonas of Missouri City, TX, Renee and Virgil Martin of Lipan, TX, and Dawn and William Hennessey of Dallas, TX; his grandchildren and their spouses, E. Lee Hammett III, Samuel and Jillian Puorro-Hammett, William and Ariel Hammett, Jake Martin, Katelyn Martin, Gage Jonas, Pearce and Reid Hennessey, and great-grandchildren, Aubrey Kay, Graham and Jamison Hammett, and his honorary son and best friend, Emilio Osterling. He was preceded in death by his parents, Melvin and Pattie Lou Blankenship, his brother, Wayne Blankenship and his grandson, Tony Heck. Bob graduated from Ouachita Parish High School in Louisiana and served in the US Air Force during the occupation of Japan from 1950-1954. He attended Louisiana State University on the GI Bill and earned his Bachelor of Science in Accounting in 1958. Bob worked as an accountant in Baton Rouge and moved to Houston in 1974 where he worked in real estate. An avid outdoorsman, Bob hunted and fished as long as his body would allow and was an LSU Tigers fanatic, able to list coaches and some of his favorite players from the 1950s to the current 2018 season. He was an Astros fan and celebrated last year’s World Series win with enough elation to carry him through his final weeks. Bob loved his monthly poker game, hosting a fish fry and cooking his famous barbecued brisket for his family and friends. Funeral services will be at St. Thomas Presbyterian Church, Memorial Drive at Bateswood, Houston, at 11:30 am Saturday, September 22. Donations can be made in Bob’s memory to the LSU Foundation www.lsufoundation.org/bobbyblankenship

The family of Bobby R. Blankenship created this Life Tributes page to make it easy to share your memories.

Send flowers to the Blankenship family.