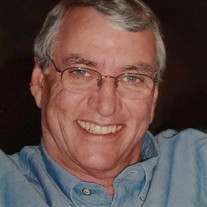 Brian Patrick Buckley, age 69, passed away peacefully January 24, 2019 after a courageous battle with Frontotemporal Dementia (FTD). He was born on October 6, 1949 in Seattle, Washington to the late Ruth and R.M. Buckley. He is survived by his loving wife of 30 years, Elizabeth Cox Buckley, and his three beautiful daughters and sons-in-law: Jennifer and Ryan Hall, Lindsey and Kyle Leonard, and Morgan and Peter Welch. He adored and cherished his five grandchildren: Hank, Wes and Luke Hall, and Meredith and Charlotte Leonard. Brian and his six siblings relocated to Beaumont, Texas in the early 1950s where he spent his childhood. He attended Schreiner Military School, Lamar University, and The University of Texas at Austin. As President of Brian Thomas Display and Packaging, he was an active member of the Association of Independent Corrugated Converters (AICC). He served as a regional director for AICC in 1997-2000, then as a Director at Large from 2000-2002. He was named Vice Chairman in 2002 and served as Chairman of the Association in 2006-2007. Additionally, he was an active supporter and member of the Board of Directors for the International Corrugated Packaging Foundation (ICPF). “The Beach,” on Galveston Bay, was Brian’s happy place where he thoroughly enjoyed spending time with his family and lifelong friends. He was an avid woodworker and devoted many hours working on projects in his shop. As a man of the outdoors, he loved hunting and fishing, and was an avid supporter of CCA and Ducks Unlimited. His abundant generosity and vibrant personality were larger than life. Please join us in celebrating his life Tuesday, January 29, 2019, 12:30 PM at St. Francis Episcopal Church, 345 Piney Point Road with a reception to follow at Royal Oaks Country Club, 2910 Royal Oaks Club Drive. In lieu of flowers, donations may be made to Houston Methodist Hospital in support of the Nantz Alzheimer Center, Frontotemporal Dementia (FTD) Unit, PO Box 4384, Houston, Texas 77210-4384 in memory of Brian Buckley, or the charity of your choice. Visit www.DettlingFuneral.com to leave words of condolence for the family.

Brian Patrick Buckley, age 69, passed away peacefully January 24, 2019 after a courageous battle with Frontotemporal Dementia (FTD). He was born on October 6, 1949 in Seattle, Washington to the late Ruth and R.M. Buckley. He is survived by his... View Obituary & Service Information

The family of Brian Patrick Buckley created this Life Tributes page to make it easy to share your memories.

Send flowers to the Buckley family.