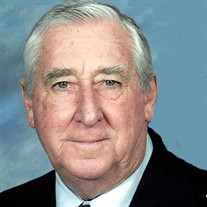 Brian R. Suthers, aka Big Daddy, passed away early Sunday, October 16, 2016. Brian is survived by his loving wife of 56 years, JoAnn; daughter Vicki and husband John Albus, son Derek and wife Sarah and sons Ben and Ethan, and daughter Britt and husband Mike McCrary and son Connor; daughter Kimberly Suthers and son Robert; and daughter Susan and husband Scott Ayers and children Christopher and Amy. He is also survived by two younger brothers, Richard and wife Glenda of England and Peter and wife Ann of Seattle and France; brother in law Larry Talley and wife Kimie of Mesa, Arizona; and sister in law Myrhl Watford of The Villages, Florida, plus numerous nieces and nephews. Brian was born to William and Lois Suthers on November 26, 1935, in Rochdale, England. After attending Salford University in England, he studied at Vanderbilt University in Nashville, Tennessee receiving a PhD in Chemistry. There Brian met and married JoAnn. He took a position with Shell Chemical Company and, for more than 30 years had various positions across the country, always returning to Houston. Brian has been a long time member of Memorial Drive Presbyterian Church, Pine Forest Country Club and a supporter of the Houston Symphony. He was an avid reader, loved cooking, golf, bridge, and spending time with his family – especially his grandchildren. Brian enjoyed travel and visited many different countries around the world. He loved his years of volunteer work at MDPC. A Memorial Service will be held on Friday, October 21, 2016 at 2:00pm in the Chapel at Memorial Drive Presbyterian Church, 11612 Memorial Dr., Houston, TX 77024 with a reception following in the Parlor. In lieu of flowers, the family suggests contributions to The Assistance League of Houston or the charity of your choice.

The family of Brian Robert Suthers created this Life Tributes page to make it easy to share your memories.

Send flowers to the Suthers family.