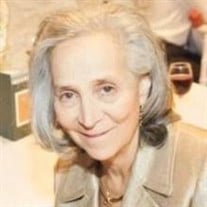 Carol Joan Putzel Moeller, 75, passed away on Sunday, July 12, 2020 in Houston, TX. She was born on November 28, 1944 in Baltimore, MD and graduated from the University of Maryland. She met Ed Moeller while attending graduate classes at Towson State, married him in Baltimore on February 8, 1969 and then became a forever Texan. In Houston, Carol was involved in various charities including the Pin Oak Horse Show, Junior Forum, and most recently served on the International Committee at the Houston Livestock Show & Rodeo. She began her 2nd career teaching at St. Cecilia Catholic School in 2000 where she treated every child as one of her own. Carol loved traveling with her family and friends and visited England, France, the Caribbean, Japan, Ireland, Wales, China, Australia, New Zealand, Italy, Germany, the Czech Republic, Hawaii, and finally Alaska. She had a passion for anything pink, chocolate, music and dancing, and especially spoiling her grandchildren. Carol will be remembered for her selfless giving, never having met a stranger, treating everyone like family, and her home always being open for short or long term visits. Carol is preceded in death by her parents, Lewis and Emily Putzel, and is survived by her husband of 51 years, Edward Moeller. She is also survived by her sister Barbara Strouse, her children, Trey and Leslie Moeller, Kelly Moeller, and Daniel and Emily White, her five grandchildren, Mallory, Shelby, and Lexi Moeller, Caroline and Logan White, and many loved nieces and nephews. A memorial service will be held at St. Cecilia Catholic Church in Houston, TX at 11:00 am on Wednesday, July 15th, 2020, followed by a burial at St Mary’s Catholic Church in Nada, TX at 2:30 pm. The family suggests that in lieu of flowers donations may be made to the Alzheimer’s Foundation of America (alzfdn.org) or St. Cecelia Catholic School on 11740 Joan of Arc in Houston, TX 77024 where she taught for 15 years, her children attended and grandchildren attend.

Carol Joan Putzel Moeller, 75, passed away on Sunday, July 12, 2020 in Houston, TX. She was born on November 28, 1944 in Baltimore, MD and graduated from the University of Maryland. She met Ed Moeller while attending graduate classes at Towson... View Obituary & Service Information

The family of Carol Joan Putzel Moeller created this Life Tributes page to make it easy to share your memories.

Send flowers to the Moeller family.