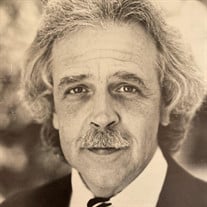 Charles Janes Bailey, of Houston, died June 5, 2020. He was 75. I was his granddaughter. A pillar of the local theater community, Charlie directed and performed in shows in every major theater in Houston. He played in dramas like Elizabeth Rex and he played in musical comedies like Singing in the Rain. He also appeared in Richard Linklater’s Bernie, Friday Night Lights, Robocop 2, along with many other film and television roles. On film, he played Isaac Newton, Albert Einstein, Alexander Graham Bell, a professor... perhaps through this flagrant typecasting you are getting a good sense of him. In the 70s and 80s, he operated the Balanese Dinner Theatre in Galveston with his partner Morgan Redman. It was there that he met his wife, Jo. They married in 1982. He was also an educator. He taught English at San Jacinto College for 35 years. He loved and championed education and learning. His papers appeared in journals worldwide. He was a scholar of Mark Twain and a scholar of Cormac McCarthy, but mostly just a scholar, who could work a Chaucer reference into his silliest stories. Born February 14th, 1945, in Cooper, TX, to Charles Woodrow Bailey and Avon Janes Bailey. He spent most of childhood in Canada and Connecticut, but the family returned to Cooper when he was thirteen. He left only three years later for Duke, and then East Texas University, and then, eventually, Houston, but the town lingered in his memory. He traced his own fate with that of the small Texas town, writing: “I graduated and went to college and graduated again and left for good and went to work and made new friends and did new things and fell in love and got married and lost my parents and sold my family home and then came back to my forty-seven-year reunion. Cooper’s humbling seems very fast, although it took my lifetime, but then time has changed. Now the seasons flash by. Always before, I had the insulation of another generation between me and death. No more. That insulation departed with my parents. I have passed into that stage of life we call old age. My generation has become the next to go. So be it.” He is preceded in death, as he says, by his parents. He is survived by his beloved wife, Jo Perkins Bailey; three children, Marc Perkins, Monti Perkins, and Julie Perkins and husband Kenneth Oatman; four grandchildren, Alexandra, Hannah, Rhodes, and Sophie Oatman; a sister, Nancy Hankins, and many, many friends. He loved celebrations. A half-celebration wouldn’t’ve done for him, so we will see you for a real, big one when it is safe to gather. Save your funniest Charlie Bailey stories. In the meantime, have a little funeral food for him. Not a sad cheese tray from Sam’s Club – the real stuff: we’re talking fried okra, chicken spaghetti, pork-laced green beans, a big piece of pie. In lieu of flowers please donate to your favorite charity or share a good book.

Charles Janes Bailey, of Houston, died June 5, 2020. He was 75. I was his granddaughter. A pillar of the local theater community, Charlie directed and performed in shows in every major theater in Houston. He played in dramas like Elizabeth... View Obituary & Service Information

The family of Charles Janes Bailey created this Life Tributes page to make it easy to share your memories.