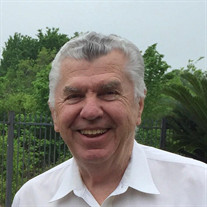 Charles John Beck, Sr., 79, of Houston passed away Saturday, February 3, 2018. Mr. Beck was born January 25, 1939 in McKeesport, Pennsylvania to John and Frances Beck. He is survived by his wife of 53 years, Genevieve R. Beck; son, Charles J. Beck, Jr. & wife Jennifer and their daughter Caroline; son, John Beck & wife Kimberleigh and their children, Karleigh, John, David, Victoria & Jenna; son, Donald J. Beck as well as numerous nieces, nephews and extended family. Chuck was born and raised in McKeesport, Pennsylvania. He and his family moved to the Houston area in 1973 where they raised their 3 sons. Chuck was a well-respected businessman and entrepreneur. He was founder and President of TSM (a wholesale appliance distribution company) and TSMDP (a digital printing company), opening his first business in 1988. His sons later joined him in the business and worked by his side. Chuck took great pride in his son’s following in his footsteps. He was a member of IDA (Independent Distributors Association). As a business man he was a great supporter of Catholic schools and churches in the Houston area. Mr. Beck was a man of great faith and commitment to the Catholic Church, schools and charities. He was a member of St. Cyril of Alexandria Catholic Church where he was president of the Parish Council and supporter of Westheimer Social Ministry. He was instrumental in the establishment of Second Blessing which was an extension of Westheimer Social Ministry. He later joined St. Edith Stein Catholic Church where he was an active parishioner, serving as an Extraordinary Minister of Holy Communion and supporting the building campaigns of the parish. Chuck was a strong advocate of Catholic education, serving on the Board of Directors of St. John Paul, II Catholic School and was a founding board member of St. John XXIII College Preparatory School. He was also an active supporter of Strake Jesuit College Preparatory School. Chuck was a strong family man who was very involved in his children’s and grand children’s lives. He was known by his family and friends to be a generous and kind man with a huge heart. He was loved by those who knew him and will be greatly missed. The Beck family will be present to receive friends, Sunday, February 11, 2018 from 5:00 PM until 8:00 PM with a Rosary being recited at 7:00 PM at Dettling Funeral Home, 14094 Memorial Dr., Houston, TX 77079. The Funeral Mass will be celebrated Monday, February 12, 2018 at 11:00 AM at St. Edith Stein Catholic Church, 3311 N. Fry Rd., Katy, TX 77449. In lieu of flowers, please consider contributions in Mr. Beck’s memory to St. Edith Stein Catholic Church Building Fund.

The family of Charles John Beck Sr. created this Life Tributes page to make it easy to share your memories.

Send flowers to the Beck family.