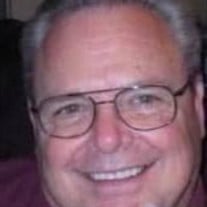 Charles Richard Buffington III (Rick) went home to be with his heavenly Father on Sunday October 31st. He was born in Galveston, TX on March 11th, 1945, to Charles R. Buffington Jr. and Mary Louise Buffington. He is preceded in death by his parents, his daughter Mary Beth Buffington, his brother-in-law Vincent Coy and in-laws Chuck and Mary Gallishaw. He is survived by his wife Janet of 38 years of marriage, his daughters Kristin L. Mata and her husband Chuy, Kathryn L. Manahan, his son’s Charles R. Buffington IV (Rick) and his wife Amy and Jesse Robinson. In addition, Rick had 6 grandkids: Zachary Edgerton (19), Maddie Buffington (18), Richard Bargaleski (15), Christopher Manahan (15), Ella Buffington (14), and Katelyn Manahan (13). Rick is also survived by his older sister Sue Coy, whom he absolutely adored and affectionately called Susie, his nephew Ryan Coy, brother-in-law’s Joe Gallishaw, John Gallishaw, and sister-in-law Jeanie Ferrell and her husband Johnny as well as his ex-wife Patricia Buffington. Rick grew up all over due to his father being an officer in the Army. At the ripe age of 2 years old, his mom would share stories of him being her interpreter while living in Japan. From Japan he lived in Virginia, New York (Brooklyn), Alaska, St. Louis, and finally settling in San Antonio, TX. Rick attended and graduated from Robert E. Lee High School in 1963. While at Lee, he was a member of the baseball team and multiple other clubs. After graduation, Rick went off to the University of Texas. He served as a member of the US Army Reserves and eventually moved to Houston in the late 1960’s to take up a career in the Oil and Gas industry. Rick retired from Cameron in 2014 where he had worked in many positions from Project Management, Sales, and Sales Management. Rick enjoyed playing golf, watching golf, watching the Astros and going to games. Rick was an avid guitar player and singer. He loved to entertain people and could be a bit of a ham. Rick truly loved his family and got the biggest kick out of spending time with his kids and grandkids. Rick had many friends, and it was always a hoot to listen to him engage in conversation and become the life of the party. While not a very religious man, Rick accepted Jesus as his Lord and Savior at a young age. You could see his Christian attributes by the way engaged and cared for people, whether they were his family, friends, co-workers or a stranger he just met. Rick will be missed by many, but there is comfort knowing he is smiling down on all of us. A memorial service will be held Saturday November 6, 2021, at 11:00 AM at Dettling Funeral Home 14094 Memorial Drive, Houston, TX 77079, with reception to follow. In Lieu of flowers please consider a charitable donation to the Dementia Society of America.

Charles Richard Buffington III (Rick) went home to be with his heavenly Father on Sunday October 31st. He was born in Galveston, TX on March 11th, 1945, to Charles R. Buffington Jr. and Mary Louise Buffington. He is preceded in death by his... View Obituary & Service Information

The family of Charles Richard "Rick" Buffington III created this Life Tributes page to make it easy to share your memories.

Charles Richard Buffington III (Rick) went home to be with his...

Send flowers to the Buffington family.