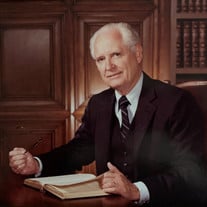 Born at home in Commerce, Texas, September 7, 1922, Charles Cunningham was the second son of William Cunningham and Naomi Stokes. After failed attempts at farming, William and Naomi packed their two boys into a Model T Ford and moved west to... View Obituary & Service Information

Send flowers to the Cunningham family.