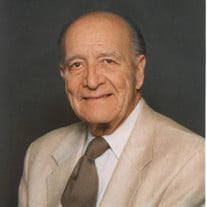 On December 30, 2020, at age 95, Chuck Edwards exchanged his earthly home for a better one in heaven. Chuck was born on November 8, 1925 in Strawn, Texas as the only child of Murray Ardis Edwards and Johnnie Burt Edwards. Strawn, Texas was founded by some of Chuck’s ancestors on their way to the West. His father was in the banking business and was instrumental in assisting a number of failing banks in reorganization of operations during the Great Depression. As a result, the family moved to several small towns such as Ranger, Mingus, Lorraine, Thurber, and Santa Anna. He was given a pony which he rode to school. During a trip to that area about 2 years ago with friends, he was delighted to find one of the banks in which his father had worked and a grammar school he had attended but was disappointed that the tree to which he had tied his pony was not still there. The family later moved to Ft. Worth where Chuck graduated from Paschal High School. He served as a cheerleader and also enjoyed scouting, playing tennis and golf. After graduation Chuck volunteered for service in the Army and was assigned to Infantry and later to Field Artillery. First, he was sent to Hawaii then to the Philippines and was due to be part of a raid on Japan when atom bombs were dropped, and World War II ended. Chuck graduated from Tulsa University with a degree in Geological Engineering in 1949 and shortly after, married Mary Ann Ramsey, and accepted a position with Standard Oil Company of Texas (an affiliate of Standard of California, later to become Chevron Corporation). This position required Chuck and his family to move more than 30 times in 3 years assigned to various seismic crews working in Texas, Oklahoma, New Mexico, and Louisiana. His move to Houston in 1953 lasted 10 years, during which he and his family were active members of Bellaire Presbyterian Church. After this, his assignments took him to Denver, San Francisco, and New Orleans. Due to his early affinity for horses and cattle, he and a friend bought farm property in Grimes County in 1961 and acquired Red Brangus cattle and later he was the owner of several racehorses. Chuck moved back to Houston in 1971 as Chief Geophysicist for Chevron Corporation. His wife Mary Ann had developed cancer, was treated at M.D. Anderson, and died in 1979. Chuck continued to travel extensively, and married Linnie Lackey (Bain) in November 1980. He retired as Chief Geophysicist of Chevron Corporation after 36 years in service. His retirement lasted 5 months, at which time he accepted positions to serve on the Boards of Digicon and Landmark Graphics. He and Linnie continued worldwide travel which took them to 6 continents. They bought their retirement home at Walden on Lake Conroe but Chuck forgot to retire. He was involved with several start-up companies, i.e., Exploitech, Identification International, 3i Technology, CDX, and Earth Energy. Chuck finally closed his office at age 93. Chuck was predeceased by his parents Murray Ardis Edwards and Johnnie Burt Edwards, and Mary Ann Edwards, the mother of his children. He is survived by Linnie Edwards, his wife of 40 years, as well as his daughter Terre (Jim) Madden of Southlake, TX., and his son Clifford (Carolyn) Edwards of Oregon, granddaughter Darcie (Tom) Neils of Oklahoma, grandson Scott (Lisa) Barbour of California, and 4 great-grandchildren. Chuck was a man of much integrity and Christian values with a willingness to help others who needed it. He and linnie were active members of Memorial Drive Presbyterian Church. Our sincere thanks go to his caretakers Grace Fitzgerald, Mary Meehan, and Heather Meehan who gave him such good attention, along with staff of Trinity Hospice for their endless assistance. A small gathering will be present for the inurnment at the Columbarium at Memorial Drive Presbyterian Church. A memorial service will be held at a later time. Any contributions may be sent to Memorial Drive Presbyterian Church, 11612 Memorial Drive, Houston 77024, or to the charity of your choice.

On December 30, 2020, at age 95, Chuck Edwards exchanged his earthly home for a better one in heaven. Chuck was born on November 8, 1925 in Strawn, Texas as the only child of Murray Ardis Edwards and Johnnie Burt Edwards. Strawn, Texas was founded... View Obituary & Service Information

The family of Charles Edwin Edwards created this Life Tributes page to make it easy to share your memories.

Send flowers to the Edwards family.