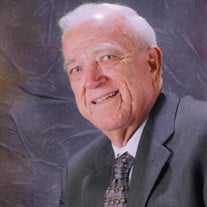 Charles Richard Fisk, 88, of Houston, Texas passed away peacefully surrounded in love by his family on December 15, 2020. Charles was born December 22, 1931 in McGregor, Texas to Bryan and Louise Fisk. He is preceded in death by his son Michael Raymond Fisk and Linda Elaine Fisk-Montello. Charles is survived by his Wife Luz Marina of 62 years of marriage as well as his children Dianna Kinsman and husband James, Janet Menefee and husband Charlie, Bryan Fisk and wife Elaine, and Patrick Fisk and wife Erin, his sister Trudi Scarborough and husband Ted. He is also survived by his eleven grandchildren Angela Montello, Courtney Kinsman, Brittany Agrodnia, Stephanie Roberts, Paige Lamb, Bryan Michael Fisk, Reagan Fisk, Ben Fisk, Michael Fisk, Rachel Fisk, and Maggie Fisk and two great grandchildren Pierce Groome and James Agrodnia. Charles grew up in McGregor, Texas along with seven brothers and two sisters. He graduated from McGregor High School and then went on to enlist in the U.S. Air Force where he served with distinction in the Korean War. Afterwards he joined the U.S. Army Reserves and also attended classes at Texas A&M University. He subsequently took a job with Superior Oil Company and had a long and distinguished career in their Geophysics Department. His job took him to Venezuela in the late 1950’s, which is where he met his bride, Luz Marina Colman. He eventually brought her and their first three children back to Houston, Texas in 1964. They have remained in Houston ever since. Charles was a devoted family man and served as the patriarch of not only his immediate but also extended families. He loved attending the Fisk family reunions and served as the anchor for these events after most of his siblings had passed on. He was also a voracious reader, and when he was not involved in family activities he would always be found with a book. Charles will be sorely missed by all those who loved him but the impact of his legacy will resound in the ensuing generations of his family. The Funeral Mass will be held Friday, December 18, 2020 at 10:30 am at St. John Vianney Catholic Church, 625 Nottingham Oaks Trail Houston, Texas 77079, the Reverend R. Troy Gately, Celebrant.

Charles Richard Fisk, 88, of Houston, Texas passed away peacefully surrounded in love by his family on December 15, 2020. Charles was born December 22, 1931 in McGregor, Texas to Bryan and Louise Fisk. He is preceded in death by his son Michael... View Obituary & Service Information

The family of Charles Richard Fisk created this Life Tributes page to make it easy to share your memories.

Send flowers to the Fisk family.