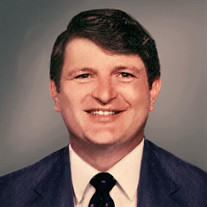 Charles Edward Pierson (Houston, TX), known to friends and family as Chuck, passed away at the age of 72 on Monday, March 8, 2021. Chuck is survived by his loving wife of 51 years, Mary Gilmore Pierson. He is also survived by his four sons and one daughter, Charles, Jr., Kyle, Jeremy, Jonathan, and Robin, along with his nine wonderful grandchildren, Trey (Charles III), Kayla, Cameron, William, Brooklyn, Charlie, Ronan, Noa and Nim. Chuck’s life was full of love with a large family including his brothers, Ken, Stan, Andy, Aeryk and sister, Becky Tillman, as well as many nieces, nephews, cousins, and in-laws. Chuck was born in Columbus, Kansas in 1949 to William T. Pierson and Mary Stark Pierson. He was preceded in death by both of his parents, two brothers, William "Butch", Roger and a sister, Mary. He spent time in Kansas and Texas throughout his childhood. He was courted nationally by universities as a renowned athlete in both football and basketball. Chuck served in the US Army during the Vietnam War. After an honorable discharge, Chuck continued his education and graduated from Pittsburg State University in 1976. After graduating, Chuck moved his family to Houston, Texas to help found a petrochemical packaging company. Until his retirement in 2018, Chuck worked in the packaging and logistics industry and was a respected professional and trusted leader. A lifelong learner, Chuck’s two favorite pastimes were music and genealogy and he shared both lovingly and readily with anyone who showed interest. He never met an instrument he couldn’t conquer and never met a relative who was not immediately added to his ancestral research. Chuck was always happy to discuss chord progressions and proud to relate that he’d traced his family all the way back to the 900’s. Chuck’s happiest accomplishments were being a father and a grandfather. He was proud to be able to offer his kids the opportunities he did not have growing up. Pa Pa, as Chuck was known to his grandkids, and, specifically “Texas Pa Pa” from those grandchildren living outside the US, always made time to listen, to share a story, to be the best grandparent he could be. Chuck’s life was cut short by a battle with cancer. Chuck dealt with his illness just as he did with all experiences in life, with equal measures of humor and strength. On his final day, he was surrounded by family, whom he adored and who adored him in return. Chuck will be missed deeply and remembered fondly. A Catholic Funeral Mass will be held on Monday, March 15th at 10:00 am at St. Jerome Catholic Church, Houston, TX. Interment will be held at a later date at Houston National Cemetery,10410 Veterans Memorial Dr., Houston, TX 77038. The family requests that anyone wishing to make a donation in his honor do so to either an autism charity which is close to his heart https://www.hopeforthree.org/about-us/ or to https://www.emmausspiritualitycenter.com/.

Charles Edward Pierson (Houston, TX), known to friends and family as Chuck, passed away at the age of 72 on Monday, March 8, 2021. Chuck is survived by his loving wife of 51 years, Mary Gilmore Pierson. He is also survived by his four sons and... View Obituary & Service Information

The family of Charles Edward Pierson created this Life Tributes page to make it easy to share your memories.

Send flowers to the Pierson family.