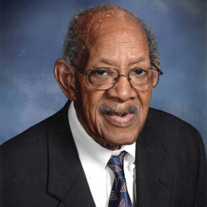 Charles Joseph Pipkins Sr. of Houston, Texas died September 27, 2019 at the age of 85. Charles was born August 6, 1934, in St Louis, Missouri to Robert Pipkins and Fannie Washington. He was preceded in death by his mother and father, Brother Robert H Pipkins Sr., James P Pipkins Sr. and Sister Ida Sue Steel. The Pipkins family moved to East Chicago, Indiana in 1941 and shortly their after moved to Gary, Indiana. Charles attended Roosevelt High school and went on to join the Air Force in 1955 and was stationed at Lackland Air Force base in El Paso, Texas, he was honorably discharged and returned to Gary where he began working as a skate guard at Barbara’s Play House. He became a skillful roller skating guard and passed on his love and skating skills to his children and grandchildren. In 1958, Rev Father Nolan of St Monica Parish introduced him to Janice L. Steverson, where he found the love of his life and married her on December 29, 1961. Charles used his middle name growing up in Gary and most of his friends and family called him Joe Pipkins. After marring Janice, Joe found employment working at United States Steel Corporation and worked there for 18 years. He embraced the Catholic faith when he married Janice and became a devoted follower of Christ and the church. He always attended Sunday Mass and set an example to his children that help sustain and nurture their faith in Christ. In 1985 his family moved to Houston, Texas and started to attend St John Vianney Catholic church. He and Janice moved briefly back to Gary, Indiana in 1989 to be close to his mother-in-law when she was ill. He and Janice returned to Houston in 1991 and became permanent members of St John Vianney parish. Charles (Joe) Pipkins joined the Knights of Columbus and was an active member doing charitable work visiting veterans at the VA hospital and sharing his faith with fellow veterans. He is survived by his wife Janice of 61 years and their four children: Debra Ann Scaife of Houston; Charles Joseph Pipkins Jr. of Houston; Ronald Howard Pipkins Sr. of Las Vegas and Maria Louise Jordan of Houston; seven grandchildren: Samantha L. Scaife-Harris of Houston; John H. Scaife Jr. and wife Annoinette of Kansas; Nicole Jordan-Cheeks of Houston; Darryl A. Jordan of San Francisco; Jaela M. Pipkins of Las Vegas; Ronald H. Pipkins Jr. of Las Vegas and Keegan A. Bell of Houston; nine great-grandchildren: Briah R. Harris, Tyler J. Harris, Morgan A. Harris and Madison M. Woods of Houston; Brooklyn M. Cheeks, Hollis J. Cheeks, Jiselle A. Jordan and Shai V. Jordan of Pearland and Thomas H. Scaife of Kansas; Daughter-in-law Melanie Pipkins of Las Vegas, as well as numerous nephews, nieces and cousins. The Pipkins family will be present to receive friends Thursday, October 3, 2019 from 6:00 PM until 8:00 PM with a Vigil Service beginning at 7:00 PM at Dettling Funeral Home, 14094 Memorial Drive, Houston, TX 77079. The Funeral Mass will commence Friday, October 4, 2019 at 10:30 AM at St. John Vianney Catholic Church, 625 Nottingham Oaks Trail, Houston, TX 77079. A reception will follow Holy Mass on the grounds of St. John Vianney Catholic Church. Mr. Pipkins will be laid to rest in Oak Hill Cemetery, Gary Indiana the following week.

Charles Joseph Pipkins Sr. of Houston, Texas died September 27, 2019 at the age of 85. Charles was born August 6, 1934, in St Louis, Missouri to Robert Pipkins and Fannie Washington. He was preceded in death by his mother and father, Brother... View Obituary & Service Information

The family of Charles Joseph Pipkins Sr. created this Life Tributes page to make it easy to share your memories.

Send flowers to the Pipkins family.