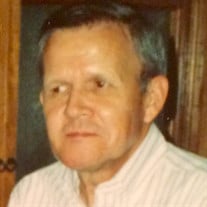 Charles E. Riquelmy, 86, passed away Saturday, April 22, 2017. Mr. Riquelmy was born May 17, 1930, in Lake Charles, Louisiana to Edward and Agnes Riquelmy. Charles is survived by his wife of 58 years Helen C. Riquelmy; his children, Christina Riquelmy of Baton Rouge, LA and Edward Riquelmy of Grapevine, TX; sister, Edwina Walker of Georgetown, TX; brother James Riquelmy of Huntsville, AL, as well as numerous nieces, nephews and extended family. Charles grew up in the Lake Charles area and attended McNeese State University before transferring to LSU in Baton Rouge where he earned his Bachelor of Science in Accounting in 1951. After college, he entered the US Army Finance Corps and proudly served his country, mainly in Germany. While based in Germany, he enjoyed travelling around Europe with his Army friends. After returning to the US and leaving the Army, he moved to Houston to work as an accountant in the oilfield services industry for Dresser Industries. Shortly thereafter, he accepted a foreign assignment to work at Dresser’s mining operation in Greece. It was during his time there that he met the love of his life Helen, a native of Greece. They were married in Athens in 1958. The family moved to Houston in 1969 where Charles and Helen have lived since that time. Charles retired from Dresser Industries in 1986. Mr. Riquelmy was a big sports fan. He especially loved to watch his LSU Tigers. He enjoyed reading, storytelling, keeping up with world affairs and current events, and spending time with his family. The Riquelmy family will be present to receive friends Wednesday, April 26, 2017, from 5:00 PM until 7:00 PM with a Vigil service beginning at 6:30 PM at Dettling Funeral Home, 14094 Memorial Dr., Houston, TX 77079. A Funeral Mass will be celebrated Thursday, April 27, 2017 at 10:00 AM at St. Cyril of Alexandria Catholic Church, 10503 Westheimer Road, Houston, TX 77042. Mr. Riquelmy will be laid to rest in Greenwood Cemetery, Jennings, Louisiana later in the week. In lieu of flowers, donations may be made to the American Heart Association (www.heart.org/), the LSU Foundation (www.lsufoundation.org), or a charity of your choice.

The family of Charles Edward Riquelmy created this Life Tributes page to make it easy to share your memories.

Send flowers to the Riquelmy family.