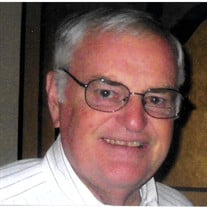 Charles Richard (Chuck) Roe, 78, of Houston passed away with peace and honor on Sunday, July 8, 2018 while surrounded by his devoted family. Chuck was born February 6, 1940 in Ventura, California to Charles and Lois Roe. He is survived by his wife of 52 years, Molly Donohue Roe; son, Steve Roe & wife Brigid and their children, Dillon, Kathleen, Patrick, Libby; daughter, Betsy Raetzsch & husband Hugh and their children, Wilson, Matthew, Nicholas; son, Kevin Roe & wife Collyne and their children, Cole and Garrett; son, David Roe & wife Ginny and their son, Matthew; sister, Mary Ann Riley & husband Marion as well as numerous nieces, nephews and extended family. Chuck grew up in Ventura where he enjoyed surfing, hunting, fishing and everything outdoors. He attended Oregon State University where he earned his Bachelor of Science in Mathematics and Science and was an active member of Beta Theta Pi Fraternity. After graduating, he served his country in the United States Navy for six years, attaining the rank of Lieutenant. He served on the USS Platte and later as Navigator on the USS Kitty Hawk during the Vietnam War. He concluded his Naval career at Fleet Intelligence Center, Pacific in Pearl Harbor. After completing his Naval service, he joined IBM where he spent the next 25 years in Sales and Executive Leadership positions and formed lifelong friendships. After retiring from IBM, Chuck's entrepreneurial spirit led him to executive consulting roles in technology where he completed his career. In retirement, Chuck and Molly loved to travel and frequently visited their beloved home on Madeline Island on Lake Superior in Wisconsin. An outstanding athlete, Chuck loved and competed in all sports and as a father, he thrived on coaching his children and their teammates during their youth. Every summer Chuck would pack up his family in their Orange VW Van to camp and explore the country. Chuck was passionate about the financial markets and regularly discussed stocks and finances with friends and family. Chuck loved volunteering in his community. He was active in the Social Services Ministry at St. John Vianney Catholic Church where he played many different roles helping the community and those in need. His family and friends knew him as a man of integrity with a keen wit who could deliver great one-liners. His care for others was exceptional. He was loved by everyone who knew him and will continue to live in our hearts. Chuck’s family would like to gratefully thank the dedicated staff at Rose’s Retreat, A*MED Community Hospice and our loving, personal care-givers who were all so devoted to caring for Chuck. The Roe family will be present to receive friends Sunday, July 15, 2018 from 5:00 PM until 7:00 PM with eulogies beginning at 6:00 PM at Dettling Funeral Home, 14094 Memorial Drive, Houston, TX 77079. The Funeral Mass will commence Monday, July 16, 2018 at 10:30 AM at St. John Vianney Catholic Church, 625 Nottingham Oaks Trail, Houston, TX 77079. For the past 10 years, Chuck battled Parkinson's Disease. In lieu of flowers please consider contributions to memorialize Chuck’s courageous fight at https://www.hapsonline.org/. Alternatively, contributions can be made to the place where his volunteering spirit lives on, at St. John Vianney Catholic Church, Social Services at https://stjohnvianney.churchgiving.com/ws/opportunities/socialministry/donate. Visit www.DettlingFuneral.com to leave words of condolence for the family.

Charles Richard (Chuck) Roe, 78, of Houston passed away with peace and honor on Sunday, July 8, 2018 while surrounded by his devoted family. Chuck was born February 6, 1940 in Ventura, California to Charles and Lois Roe. He is survived by... View Obituary & Service Information

The family of Charles Richard (Chuck) Roe created this Life Tributes page to make it easy to share your memories.

Charles Richard (Chuck) Roe, 78, of Houston passed away with...

Send flowers to the Roe family.