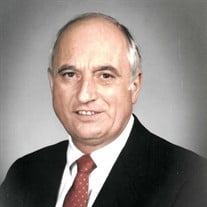 Charles M. Struffolino, 86, of Conroe, TX, passed away, Saturday, July 30, 2016 surrounded by his loving family. Chuck was born February 9, 1930 in Toledo, OH to Charles & Mary Struffolino. He is preceded in death by his parents and his beloved wife Shirley. Mr. Struffolino is survived by his children, Rosemary & Mike Blum, Mike & Sharla Struffolino; grandchildren, David & Katie Blum, Brian Blum, Elizabeth Struffolino, Michael Struffolino and Lauren Struffolino; sisters, Elizabeth Graher and Janet Pegan; sister-in-laws’, Roberta Ogden and Roseann Ruedy; and his dear friend Nancy Daugherty. Chuck was born in Toledo, Ohio where he attended Central Catholic High School. He received his BS in Chemistry from John Carroll University in Cleveland, OH before joining the US Army where he served as a Chemist during the Korean conflict with a rank of Staff Sergeant. In 1951, Chuck married his high school sweetheart, Shirley and started his career with Armco Steel where he spent the next 30 years. After several moves, they settled in Houston where they raised their 2 children. Upon retiring from Armco/National Supply, Chuck worked at Baron Guernsey for 14 years and Continental Airlines for 10 years. Chuck was actively involved in the community serving as field manager for the Spring Branch Memorial Sports Association and president of the Stratford High School Booster Club, 1980-81. Chuck was a long time member of St. John Vianney Catholic Church where he served as an usher. The most important activities to him were coaching and cheering for his children’s sports teams. Chuck was a very friendly, passionate, loving and caring person who never met a stranger. He was a hardworking man who took good care of his family and friends. He was loved by those who knew him and will be greatly missed. A Memorial Mass will be celebrated Thursday, August 4, 2016 at 2:00 PM at St. John Vianney Catholic Church, 625 Nottingham Oaks Trail, Houston, TX 77079. A reception will follow Holy Mass on the church grounds. Mr. Struffolino will be laid to rest in VA Houston National Cemetery at a later date.

Charles M. Struffolino, 86, of Conroe, TX, passed away, Saturday, July 30, 2016 surrounded by his loving family. Chuck was born February 9, 1930 in Toledo, OH to Charles & Mary Struffolino. He is preceded in death by his parents and his beloved... View Obituary & Service Information

The family of Charles Michael Struffolino created this Life Tributes page to make it easy to share your memories.

Send flowers to the Struffolino family.