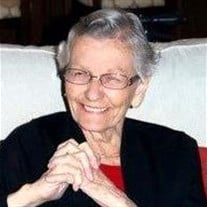 Christina M. Herring, a 5-year resident of Houston, Texas passed away Saturday, February 24, 2018 at the age of 85. The daughter of the late Emil and Greta Malm. Christina was born April 20, 1932 in Tidaholm, Sweden and raised in Skara, Sweden. She attended and graduated from Lund University in Lund, Sweden where she studied physical therapy. Her dream was always to come to the United States. When she was 22 years old she arrived at Ellis Island to start a new life. She worked with children diagnosed with polio in Warm Springs, Georgia where she met the love of her life. On September 17, 1955 she married John Marshall Herring. They were married for 53 years until his death at the age of 85 on February 10, 2008. Christina lived in Atlanta, Georgia and Richmond, Virginia. In 1968, John and Christina moved their family to San Antonio, Texas where she lived until 2013. In January 2013 Christina moved to Parkway Place Assisted Living in Houston, Texas to be closer to her daughter, Lisa and her family. Christina was an avid golfer, having 3 holes in one, a Blue Bird volunteer at Methodist Hospital, loved listening to music, traveling across the United States and abroad and watching game shows. Christina is preceded in death by her parents Greta and Emil Malm, her husband, John of 53 years, and her son Richard Herring. She leaves behind to cherish her memory, her daughter, Lisa Herring Kouns and husband, Brian and their daughters Lauren and Jordan; her daughter -in -law, Melissa S. Herring and her children, Marshall Herring and Rachel Perlich; and her brother, Lars Malm of Skara, Sweden. Christina will be deeply missed by all who loved her. We would like to thank the amazing staff at Parkway Place for their loving and compassionate care of Christina. A Memorial Service celebrating Christina’s life will be held Saturday, March 3, 2018 at 10:00 AM at Dettling Funeral Home 14094 Memorial Drive, Houston, TX 77079. In lieu of flowers, memorial contributions can be made to The American Heart Association at www.heart.org .

Christina M. Herring, a 5-year resident of Houston, Texas passed away Saturday, February 24, 2018 at the age of 85. The daughter of the late Emil and Greta Malm. Christina was born April 20, 1932 in Tidaholm, Sweden and raised in Skara, Sweden.... View Obituary & Service Information

The family of Christina M. Herring created this Life Tributes page to make it easy to share your memories.

Send flowers to the Herring family.