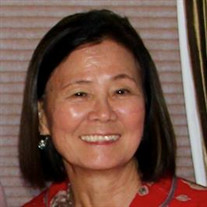 Chun Mei “Vicky” Buff (Shih), 75, of Arkansas, passed away peacefully on December 18, 2020 at the home of her daughter in Houston, Texas. Vicky was born on March 4, 1945 in Taipei, Taiwan. Vicky’s biological father, a member of the well-known Soong family, was an attorney and her biological mother, Chen, Ju Hua, was a Chinese Opera singer. Vicky was adopted at a young age by her loving parents, Ko, Yang Shing and Ko-Shih, Hsien and Vicky was given her adopted mother’s family name (Shih). Her adoptive father, Ko, Yang Shing, was a well- known chef and caterer in Taipei. She often assisted her father in preparing dishes for these large catered banquets. Her adoptive mother, Ko-Shih, Hsien, was a devoted homemaker and mother. Vicky had a very strong bond and greatly loved her adoptive parents and siblings, and was fortunate as well to have a relationship with her biological parents and siblings. Vicky graduated from High School at 17, and began working for the China Post Newspaper as an English language typesetter. Shortly after, she met her loving husband, David Buff, in Taipei while he was stationed in Taiwan with the US army. They dated for three years and married when she was 20 years old. Vicky and David relocated to the U.S. shortly after marriage to begin their life together. After relocation to San Antonio, Texas her first daughter, Carole, was born. Later they moved to Dallas, TX where she had two more daughters, Teresa and Karla. She was a stay at home mother devoting her time to raising her young daughters. After moving to Houston, Texas, she started her in-home child care business and continued nurturing young babies and toddlers for over 20 years. The many children and their families became very close and have continued to stay in touch over the years. Even though she came to the U.S. at a young age, Vicky, her husband, and daughters were able to make many extended trips back to Taiwan through the years. These visits allowed her the opportunity to introduce her daughters to Chinese customs and traditions as well as favorite foods. Once her daughters were grown and graduated from college; she and her husband retired and relocated to Mountain Home, Arkansas. During her retirement years, she spent her time volunteering, traveling, gardening, cooking and spending time with her family. She enjoyed volunteering for the Mtn. Home Food Basket, the Master Gardener Club and volunteering over 20 years at the Baxter Regional Medical Center Bargain Box. Vicky’s passion for cooking started at a young age while working with her father’s catering business. Vicky loved spending her time in the kitchen and outdoors working in her garden and taking care of her plants. She was a master gardener and a member of the Baxter County Master Gardener club. She competed in the Horticulture exhibits yearly in the Baxter County Fair, and was most proud of the time she won 1st place for “Best of Show” of her Chinese winter melon. Her cooking passion was passed down to her daughter, Carole. Vicky and her husband shared a love for traveling and eating their way around the world. Tasting all of the new and unique flavors of different cultural dishes. They traveled to places such as Germany, England, the Bahamas, Bolivia, Mexico, Korea, China, Thailand, Canada, Taiwan as well as most of the states in the US. Chun Mei (Vicky) Buff was a caring, loving and devoted wife, mother, grandmother, sister and friend. If you had the privilege of meeting Vicky, you made an immediate friend. She made friends with everyone, everywhere she went. She was the most compassionate, selfless, patient, loving and giving person. She would always put other’s needs before her own. After a year and a half of fighting Non-Hodgkin’s Lymphoma, she lost the battle she had so courageously fought. No matter how bad she felt or how sick her treatments made her feel; she always stayed positive and never complained. She is survived by her husband of 55 years, David Buff; her daughters, Carole (Michael) Strachan, Teresa (Waymon) Votaw, and Karla (Dave) Ehlis; her brother Ko, Shih Ring and his wife Liu, Hsiu-Chen “Jenny” and their children Ko, Yi-Tung “Yvonne”, Ko, Zih-Shian “Mimi”, and Ko, “Hank” and Ko, “Hans”; her sister Ko, Bie-Lien; and five grandchildren; Maksim Strachan, Anna Votaw, Christian Votaw, Taylor Ehlis, and Elizabeth Ehlis. The Funeral Mass will be held Tuesday, December 29, 2020 at 1:30 PM at St. John Vianney Catholic Church, 625 Nottingham Oaks Trail, Houston, Texas 77079, the Reverend R. Troy Gately, Celebrant. The family would like to extend their gratitude to MD Anderson for the care they provided Vicky during her treatments for the past year. In lieu of flowers, please consider a charitable donation to MD Anderson. Your donation will go towards helping with further research in finding a cure for Lymphoma. For direct access and convenience, you may donate online to the link below: http://mdacc.convio.net/goto/chunmeibuff Or if you prefer to mail a donation (checks/no cash), please mail to: MD Anderson Cancer Center– Fundraise to End Cancer P.O. Box 4470 Houston, TX 77210-4470 Please add to check memo: Code:fec20r P2PCONV:1410069

The family of Chun Mei "Vicky" Buff created this Life Tributes page to make it easy to share your memories.