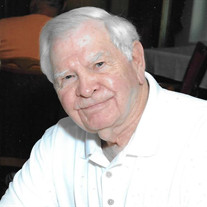 Clarence A. Platt, 87, passed away Sunday, May 21, 2017. He was born January 8, 1930 in Shreveport, Louisiana to Clarence James Platt and Bernice Allen Platt. Clarence is survived by his wife of 67 years Carmen M. Platt; sister Patricia Kelton of Atlanta, TX, daughter Carla and her husband John Grimaudo of Rockport, TX; son Clarence James (Jim) & his partner Kevin Phillips of Houston, TX; Grandson Aaron Grimaudo, wife Rebekah O’Preska and their two children Adelaide & Thalia of Cedar Park, TX. Clarence spent most of his youth in Monahans, TX where, like his father and grandfather, he became interested in the Oil and Gas industry. He worked as a rough neck putting himself through college. He attended UT, TCU & TX A&M. After receiving his Bachelor of Science in Accounting and becoming a Certified Public Accountant, Clarence entered the US Army and proudly served his country, mainly in Germany. After retiring from the services as a captain, he and Carmen moved back to Texas and settled in Houston where he focused on his accounting and auditing for various oil and gas companies. Besides accounting, Clarence was quite the entrepreneur. He and Carmen had owned small convenient stores, comic and book stores, rental homes, & even a charter fishing boat. Mr. Platt had a passion for cars which he passed down to his son. The two of them could sit for hours comparing notes on which car either one of them should buy. He loved traveling, playing bridge, fishing, hunting, RVing, and at one time he even owned and flew an ultra-lite. Above anything his else, Clarence’s main passion was spending time with his family and his beloved dog Mickey. The Platt family will be attending a private burial service for Clarence at Memorial Oaks Cemetery Friday morning, but request any who would like to join them later for “A Celebration of Life” at 2:00 PM at the Unity Church, 2929 Unity Dr., Houston, TX 77057. In lieu of flowers, donations may be made to the American Cancer Society (www.cancer.org), American Cancer Society, Attn. Donations, PO Box 22718, Oklahoma City, OK 73123-8804 or 800-227-2345 opt. 2

Clarence A. Platt, 87, passed away Sunday, May 21, 2017. He was born January 8, 1930 in Shreveport, Louisiana to Clarence James Platt and Bernice Allen Platt. Clarence is survived by his wife of 67 years Carmen M. Platt; sister Patricia Kelton... View Obituary & Service Information

The family of Clarence Allen Platt created this Life Tributes page to make it easy to share your memories.