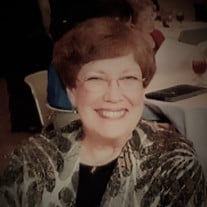 Claudia Jean Hite Crocombe died peacefully in her home on Sunday, May 21, 2017, surrounded by family and friends. She was 76 years old. Claudia is survived by her husband of 54 years, Paul Crocombe, and two sons, Stephan and Bruce Crocombe. Stephen and his wife Karin of Wichita, Kansas, have three children: Zachary (Stacy), Kendall, and Ellen Rose. Bruce and his wife Courtenay of Spring, Texas, have four children: Chase McLane (Moriah), Lauren Siddall (Josh), Haley, and Paige, and four grandchildren: Jayden, Jackson, Lennox, and Laney. Claudia is also survived by her brother, Raymond Hite (Carolyn) of Middleburg, Florida, and numerous nieces and nephews. She was preceded in death by her father Halsey Veitch Hite and mother Marie Ann Hite (Schickel). Claudia was born at East Orange General Hospital, East Orange, New Jersey on May 8, 1941. She grew up in Matawan, New Jersey, until the family moved to Jacksonville, Florida, in the early 1950s. She graduated from Terry Parker High School in 1959 and went to work at The Prudential Insurance Company (where her father worked all his life), starting in their typing pool. On Sundays she played the piano for the neighborhood Presbyterian Church. On May 25, 1963, Claudia married Lt.j.g. Paul Crocombe at the Mayport Naval Air Station, Mayport, Florida. They resided in Jacksonville until 1964 when they moved to New Orleans, Louisiana. They then moved to Tulsa, Oklahoma, and Birmingham Alabama, before settling in Houston, Texas, in 1970. Claudia and her family began attending Houston's Grace Presbyterian Church when it met at the old Walnut Bend Elementary School while the current church was being built. She played hand bells at Grace for more than 35 years and sang in the choir 30 years. Claudia loved her music and treasured her family and the many wonderful friends she made over the years. In lieu of flowers, a donation to the charity of your choice, or Grace Presbyterian’s music department, in Claudia’s memory would be nice.

Claudia Jean Hite Crocombe died peacefully in her home on Sunday, May 21, 2017, surrounded by family and friends. She was 76 years old. Claudia is survived by her husband of 54 years, Paul Crocombe, and two sons, Stephan and Bruce Crocombe.... View Obituary & Service Information

The family of Claudia Jean Crocombe created this Life Tributes page to make it easy to share your memories.

Send flowers to the Crocombe family.