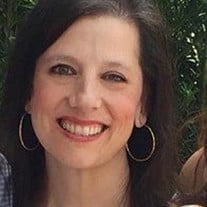 On May 15, 2017, Courtney Lynne Neilon Troup passed away peacefully at the age of 48. She was surrounded by family in her home. Courtney was born on September 28, 1968 in Houston, TX. She is survived by her daughter, Kendall Lynne Troup, son, Taylor Ray Troup, and their father, Tracy Ray Troup. She is survived by her mother, Lynne Logan Alexander and step-father, David Alexander. She was predeceased by her father, James Courtney Neilon. She was a sister to Todd Logan Neilon and his wife Jennifer. She is the daughter-in-law of Ginger and Sam Winkelmann Jr. DDS. Courtney grew up in Houston, TX and graduated from Katy Taylor High School in 1986. She also graduated from The University of Texas at Austin in 1990 with a major in Fashion Design and Retail Merchandising. There she was a member of the Chi Omega Sorority Iota chapter and served various leadership roles. During her time at UT, she was a work-study for the chairman of the Department of Human Ecology and was later named an Outstanding Young Professional for alumni in 2006. She spent over 20 years working as a district manager in retail merchandising. In addition to being a full-time, working mother, she also dedicated her time to sharing her 12-year battle with breast cancer. She was one of 8 women given the opportunity to tell her cancer journey experience for a feature story with the American Cancer Society. She was adored and admired by many and will be dearly missed by all. “May your blessings be many, The sunshine above you, Your life bring you gladness---And always … God love you!” Services to be held on Thursday, May, 18th at Memorial Drive Christian Church 11750 Memorial Dr., Houston, TX 77024 at 11 a.m. Graveside service will be in San Angelo, TX at Calvary Catholic Cemetery 1501 W. Avenue N. San Angelo, TX 76903 on Saturday, May 20th at 11 a.m.

On May 15, 2017, Courtney Lynne Neilon Troup passed away peacefully at the age of 48. She was surrounded by family in her home. Courtney was born on September 28, 1968 in Houston, TX. She is survived by her daughter, Kendall Lynne Troup, son,... View Obituary & Service Information

The family of Courtney Lynne Neilon Troup created this Life Tributes page to make it easy to share your memories.

On May 15, 2017, Courtney Lynne Neilon Troup passed away peacefully...

Send flowers to the Troup family.