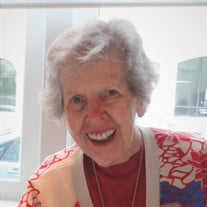 Cynthia Ketterer Gibbons 96, of Houston passed away May 27, 2021. Cynthia was born May 7, 1925 in Bucks County, PA. She is preceded in death by her husband Patrick. She is survived by her daughters Carrie Porterfield (Allan), Patti Barry (Steve), and Kate Klein (Larry); grandchildren Chris (Amanda) and Aaron (Tamara) Barry, Beth Bryan (Kirby) and Suzy Porterfield, and Peter and Mark Klein; and great grandchildren, Evelyn and Eleanor, Seth and Jeremiah, and Jackson and Kennedy. Cynthia grew up in Nutley, NJ and graduated from Cedar Crest College in 1947. She did graduate studies in costume design at Catholic University in Washington DC. After living at home for several years she drove to Houston in her little blue MG. She met Patrick, her husband of 60 years, at St Anne’s Catholic Church and they were married in November 1957. She continued to use her creative and artistic talents to guide her three daughters in developing their own talents. She was an adept seamstress and made many beautiful dresses, including a treasured baptismal gown, wedding gowns and interview suits. The family enjoyed many years at their beach house on Bolivar Peninsula, which Pat and Cynthia built themselves from lumber the family reclaimed from an old school building. Cynthia designed the house to effectively reuse the lumber and she painted Pennsylvania Dutch designs on the storm windows. Cynthia was active in the community as a girl scout leader and swim instructor. She was also involved in several ministries at St Albert Catholic Church, where she was a eucharistic minister and led the setting up of a thrift shop. After raising three independent young women she took up quilting, square dancing, and became a master gardener. In 2005, she and Pat were early residents at Eagle’s Trace Senior Living Community. While there she started the quilting group and enjoyed many game nights with friends. A Funeral Mass will be held at 10:30 am Tuesday, June 15, 2021 at St. John Vianney Catholic Church 625 Nottingham Oaks Trail, Houston, TX 77079. Burial will take place immediately following services at Forest Park Lawndale Cemetery 6900 Lawndale St. Houston, TX 77023. In Lieu of flowers please consider a charitable donation to Eagle’s Trace Scholarship fund or the educational institution of your choice.

Cynthia Ketterer Gibbons 96, of Houston passed away May 27, 2021. Cynthia was born May 7, 1925 in Bucks County, PA. She is preceded in death by her husband Patrick. She is survived by her daughters Carrie Porterfield (Allan), Patti Barry (Steve),... View Obituary & Service Information

The family of Cynthia Ketterer Gibbons created this Life Tributes page to make it easy to share your memories.

Send flowers to the Gibbons family.