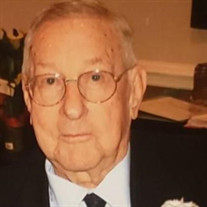 Daniel Edwin Dudley, Jr. died due to renal failure in Houston, Texas on March 7, 2022, at the age of 92. He was born on October 30, 1929. He is survived by his wife of almost 38 years, JoAnne Dudley, his daughter (Debra) Lea Dudley White, and three stepchildren, Sharon Davis (her husband Jim Davis), Susan Leiferman (her husband John Leiferman), and Steven Collins. Dan was the youngest and only son of four children. Their parents, Nina Crow Dudley and Daniel Edwin Dudley, Sr. raised their family in Groveton, Texas. Dan was preceded in death by his parents and his sisters Marjorie Reddick, Grace Horan, and Edwina Christie. He was also preceded in death in 1981 by his first wife (of 30 years) Ruth Ann Lawrence Dudley. Dan attended high school at Staunton Military Academy in Virginia. He then returned to Texas to attend Texas Tech College (which is now Texas Tech University), where he received a Civil Engineering degree. He was very proud of being a Professional Engineer and spent most of his career working in the field of natural gas. During his career, he lived in Garden City and Liberal, Kansas; Colorado Springs, Colorado; Miami, Florida; and Amarillo and Houston, Texas. He worked for Colorado Interstate Gas Company starting in 1955 and continued there until the company was purchased by Coastal Corporation in the late 1970s, which required a move to their Houston headquarters. He retired in 1988, at which time he and JoAnne moved to Conroe, Texas. Dan enjoyed watching football on TV and was a big fan of the Dallas Cowboys, the Denver Broncos, and the Houston Texans. He also enjoyed fishing, playing golf, bowling, woodworking, playing poker and slot machines, and reading. Like his father, he was a very gifted carpenter. Dan had a great sense of humor and could always be counted on to entertain others with his jokes and stories. According to Dan’s wishes, there will not be a memorial service and he will be cremated.

Daniel Edwin Dudley, Jr. died due to renal failure in Houston, Texas on March 7, 2022, at the age of 92. He was born on October 30, 1929. He is survived by his wife of almost 38 years, JoAnne Dudley, his daughter (Debra) Lea Dudley White, and... View Obituary & Service Information

The family of Daniel Edwin Dudley Jr. created this Life Tributes page to make it easy to share your memories.

Send flowers to the Dudley family.