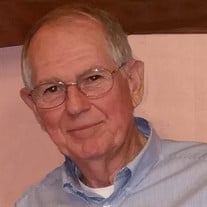 Danny T. Kelso, 73, of Rosharon, Texas, formerly of Houston, passed away peacefully at home on Friday, September 21, 2018. Mr. Kelso was born July 25, 1945 in Sentinel, Oklahoma to Andy and Sadie Kelso. He is preceded in death by his parents; stepmother, Wilma; brother, David and sister, Lola. Danny is survived by his wife of 53 years, Sandy; son, Jeffrey, daughter, Amy & husband Brad Bowman; grandchildren, Elizabeth, Matthew, Julia, Emily, Luke; great grandchildren, Audrey and Wyatt; brother, Doyle & wife Barbara; step-brother, Warren and wife Janet, as well as numerous nieces, nephews and extended family. Danny grew up in the Oklahoma City area where he attended Midwest City High School. He attended Central State University in Edmond, OK where he earned his Bachelor of Science in Chemistry. He had a long prestigious career in the Oil and Gas industry, which began in 1967 with Conoco in Ponca City, OK, where he worked in the refinery lab until he moved to Houston in 1980. Retiring from Conoco in 1987, he worked for FuelTech and Landmark Petroleum before venturing out with his own Oil and Gas ventures. Danny traveled the world during his career and enjoyed gardening, photography, and his animals. Danny was a strong, intelligent, hardworking man with a kind and generous heart. He loved his family dearly and enjoyed the time he spent with them. He was loved by those who knew him and will be greatly missed. The Kelso family will be present to receive friends for visitation and reception on Saturday, September 29, 2018 from 2:00 PM until 4:00 PM, with eulogies beginning at 2:45 PM at Dettling Funeral Home, 14094 Memorial Drive, Houston, TX 77079. In lieu of flowers please consider contributions in Danny’s memory to Habitat for Horses, 409-935-0277 (Hitchcock, TX) at https://www.habitatforhorses.org, [email protected] and/or Southern Comforts Animal Rescue (Santa Fe,TX) at https://southerncomfortanimalrescuegroups.org, [email protected]

Danny T. Kelso, 73, of Rosharon, Texas, formerly of Houston, passed away peacefully at home on Friday, September 21, 2018. Mr. Kelso was born July 25, 1945 in Sentinel, Oklahoma to Andy and Sadie Kelso. He is preceded in death by his parents;... View Obituary & Service Information

The family of Danny Thomas Kelso created this Life Tributes page to make it easy to share your memories.

Send flowers to the Kelso family.