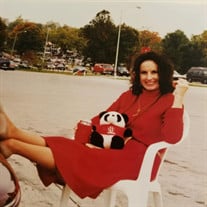 Darlene Marie Crilley 78, of Houston passed away on April 28th, after fighting a courageous battle with ALS. Darlene was born February 6th, 1943 in Brush, Colorado to Robert and Maxine Barnhouse. After spending her formative years on the family ranch, they all moved to Pierz, Minnesota. Upon graduating from Pierz Memorial High School in 1961, Darlene joined the US Navy and was honorably discharged in 1965. During her time of service, she earned an expert marksmanship metal. In the 70’s Darlene moved to Houston, Texas. And over the next 30 plus years; she was employed as a Staff Assistant in the Real Estate, Insurance, and Energy Industries. It was during this timeframe that Darlene supplemented her education by earning her Associates Degree from San Jacinto College (1990). She also served in the US Naval Reserve and was honorably discharged in 1991. Darlene and Patrick were engaged on Christmas Day 1988. They were married December 12th, 2004 in Las Vegas, Nevada. Their favorite leisure activities included visiting different wine regions (i.e., CA, OR, and TX), tailgating at Indiana University football game where Patrick was an alumnus. Darlene was a long-standing member of the American Legion Post 100 (Lake Station, IN). Darlene loved decorating for the holidays. She was an avid reader (was on her third Kindle) including the Sunday comics. For many years, Darlene attended Memorial Drive United Methodist Church. Her attendance was disrupted due to hurricane Harvey. A special thanks to dear friends Barb and Dave Coleman (Tomball, TX) who boarded them for many months while their home was repaired. Darlene was preceded in death by both her parents, all three of her siblings, her beloved father-in-law Monte J Crilley, brother-in-law Frank Overturf. She is survived by her husband Patrick, her son Erik (Kimberly) Huetter, granddaughters Cheyenne, and Kelly Marie, mother-in-law Agnes Crilley, brother-in-law Terry (Joyce) Crilley, sister-in-law Cheryl Overturf, nieces, nephews, and cousins. Her family wishes to send out a “Special Thanks” to those at the ALS Clinic at The Houston Methodist Hospital, and everyone at the Veterans Administration for “all” the help and support they provided to Darlene and Patrick. No services are scheduled. Darlene’s wish was that you do not mourn her passing but celebrate her life. This Memorial Day, please pour/order your favorite adult beverage and toast her!!! Family and friends are encouraged to send condolences by visiting www.dettlingfuneral.com.

Darlene Marie Crilley 78, of Houston passed away on April 28th, after fighting a courageous battle with ALS. Darlene was born February 6th, 1943 in Brush, Colorado to Robert and Maxine Barnhouse. After spending her formative years on the family... View Obituary & Service Information

The family of Darlene Marie Crilley created this Life Tributes page to make it easy to share your memories.

Darlene Marie Crilley 78, of Houston passed away on April 28th,...

Send flowers to the Crilley family.