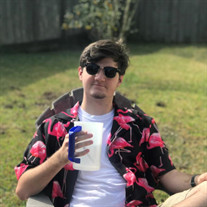 David Xavier Castro, age 17, of Houston passed away July 8, 2021. David was born February 14, 2004, in Sugarland, Texas to Paul and Sarah Castro. He is survived by his parents Paul and Sarah; siblings: Anastacia and Luke; grandparents: Martha and David Castro, Maria and Vern Dawson, Faith and Chuck Fattore; aunts and uncles: Cyndi and Danny Allison, John and Miriam Castro, Joey and Mary Dawson, Chaz and Christie Fattore, Amee and Eric Wilson; cousins: Ariana and Ian Allison, Aiden and Alyssa Castro, Charlie and Christopher Fattore, Ariel Sanchez-Soliz, Madison and Kennedy Wilson. David grew up in Houston, completed West Briar Middle School, and had just finished his junior year at Westside High School. David was a percussionist in the school band. His love of percussion started with lessons at age seven and continued for the rest of his life. He had recently been named, “Most Improved Percussionist” and was named Percussion Section Leader. David was often seen drumming out a beat against anything nearby. Outside of band, he was the Vice President of the Westside Engineering and Geosciences Academy Council and wanted to study Chemical Engineering in college. He was predicted to be a National Merit Finalist by his high score on the PSAT. David loved discussing heavy topics and would oftentimes bring a fresh perspective to the conversation. As much as David did not like school, he excelled at it, and had a great love of learning. More than anything, he enjoyed talking and gaming with his friends. Nothing made him happier than late night online gaming with his friends and his laughter could be heard through the door late into the night. He will miss each of you. More than anything, David was a funny and kind guy. He loved politics and always stayed up to date with the news. You could ask him about what was happening in the world, and he would explain any issue with the depth and humor of a late-night news comedian. He was happy to lend a hand to anyone who needed it. If he could help, then he did, and if he could not, he at least would lighten the mood with some goofy jokes. David was an old soul, deeply introspective, and always aimed to make the people around him smile. David would have worked to make the world a more just place for everyone. His early death cut short a purposeful longer life. We are thankful we had in our lives for the seventeen years we knew him. David’s friends and family will miss him dearly.

David Xavier Castro, age 17, of Houston passed away July 8, 2021. David was born February 14, 2004, in Sugarland, Texas to Paul and Sarah Castro. He is survived by his parents Paul and Sarah; siblings: Anastacia and Luke; grandparents: Martha... View Obituary & Service Information

Please consider a donation to the Castro family at https://carsonsvillage.org/family/david-castro/