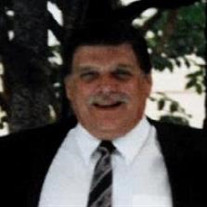 David A. Joseph, 82 of Houston died Wednesday, August 8, 2018 at his home. David was born August 27, 1935 in San Antonio, Texas to William and Carolyn Saur Joseph. He is preceded in death by his sister, Sally Carolyn Joseph, and his parents, William and Carolyn Saur Joseph. David is survived by his wife, LynnMarie Joseph; sons, Jon A. Joseph, Kelly Patrick Joseph, Brian David Joseph and Jared William Crum; daughter in-laws Brigette Joseph, Shelly Joseph and Patti Crum; daughter Susan Joseph Wilt and LynnMarie’s son, Donald W. Lasko III; granddaughters, Lauren J. Pierce & husband Wesley Pierce, Bonnie Wilt; grandson Paul David Joseph and great grandsons, Luke W. Pierce and Beau A. Pierce. David grew up in the San Antonio area and attended Texas military academy. He moved to Houston in the early 70’s where he spent the remainder of his life. He was Vice President of the Joe Stein Oil and Gas Co. After leaving the oil and gas industry in the early 80’s. He was President of the Castilian Upholstery Company on 904 W. 34th street in the Garden Oaks and Heights area till the time of his death. He was also a Deputy Constable for Precinct One under Tracy Maxon and Jack Abercia. David was an accomplished golfer and participated in many tournaments in the state of Texas, as well as Arizona, Nevada and Florida. In 1967 he made a 239 yd. from the tee and won the Ben Hogan, hole-in-one award at Memorial Park Golf Course; along with numerous trophies throughout his career. David loved the country, four wheelers, tractors and agricultural. He loved the smell of bailing hay and the birthing of calves in the spring. He was a huge animal lover and had many pedigree dogs and cats throughout his life. David had a persistent and relentless work ethic. He was methodical, well organized and a skilled salesmen. David was a charming man with a big heart and commanding presence. He contributed to the YMCA, The Catholic Church and many organizations in his community. He will be laid to rest with the ashes of his beloved toy poodle; Tasha Jane and his chocolate lab Kirby Ann. He was loved by those who knew him and will be greatly missed by many. A graveside will take place Friday, August 17, 2018 at 10:00 am. at Memorial Oaks Cemetery, 13001 Katy Freeway, Houston, TX 77079

David A. Joseph, 82 of Houston died Wednesday, August 8, 2018 at his home. David was born August 27, 1935 in San Antonio, Texas to William and Carolyn Saur Joseph. He is preceded in death by his sister, Sally Carolyn Joseph, and his parents,... View Obituary & Service Information

The family of David Anthony Joseph created this Life Tributes page to make it easy to share your memories.

Send flowers to the Joseph family.