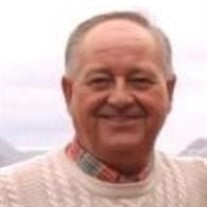 David James Marlborough, 77, of Houston passed away Sunday, February 23, 2020. David was born January 31, 1943 in West Hartlepool, England to Robert and Elizabeth Marlborough. He is preceded in death by his parents and his eleven siblings. He is survived by his wife Carol Melville of 15 years of marriage, children Amy Gibson, Sara Washa and Megan Marlborough, grandchildren Garrett Gibson, Reese Washa and Cale Washa and numerous nieces and nephews. David grew up in and around London, England. He was an avid fan of English football and in particular Manchester United. David played on the junior national soccer team. Following the early death of his father and while still in his teens David started a catering business. He coupled high school with food service residencies and completed his studies at Le Cordon Bleu School in Lyon, France. Following his education, David worked with the Metropolitan Police Service in London where he managed food procurement. In his mid-twenties, David decided to come to America. He bought a 47 foot sailboat, hired a captain and along with 5 friends he learned to sail and sailed the coast of Europe down to Africa then across the Atlantic to the Bahamas where he sold his boat and flew to Dallas, Texas and joined some of his English buddies to start his life in America. During his early years in America he owned and operated several restaurants and bars, married and became a father to Amy, Sara and Megan. Later, David moved to Houston, Texas where he began a career in hospital food service management. Always full of energy and enthusiasm, David was a jack of all trades. He was a great and generous chef, an avid gardener, a lover of words and books, an entrepreneur. His last accomplishment was designing and building his dream home, which unfortunately he was not able to move into. David’s big heart and loving and encouraging personality will be greatly missed! The Marlborough family will be present to receive friends Wednesday, March 11, 2020 from 6:00 PM until 8:00 PM with a vigil service beginning at 6:30 PM at Dettling Funeral Home, 14094 Memorial Dr., Houston, TX 77079. The Funeral Mass will be held Thursday, March 12, 2020 at 10:30 am at St. John Vianney Catholic Church, 625 Nottingham Oaks Trail, Houston, Texas 77079, the Reverend R. Troy Gately, Celebrant.

David James Marlborough, 77, of Houston passed away Sunday, February 23, 2020. David was born January 31, 1943 in West Hartlepool, England to Robert and Elizabeth Marlborough. He is preceded in death by his parents and his eleven siblings. He... View Obituary & Service Information

The family of David James Marlborough created this Life Tributes page to make it easy to share your memories.

Send flowers to the Marlborough family.