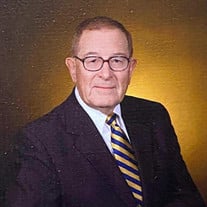 David Kingman Smith (“Papa”) passed away on April 4, 2022, in Houston, Texas, at the age of 93. David was born in Malone, New York on June 5, 1928, the oldest child of his parents Louisa Kingman Bolster and Ernest DeAlton Smith. David graduated in 1946 from Manlius High School in New York. David was accepted into the College of Forestry at Syracuse University and was due to attend Syracuse in the Fall of 1946. Instead, he opted to enlist in the United States Army with a chance to see the world knowing the G.I. Bill would pay for his college at the termination of his service. Having grown up on a farm with two younger brothers and two younger sisters, it was “an opportunity too good to miss”. On September 18, 1946, David entered the Army as a Private. Following training at the Army Camp Dix in New Jersey and in Fort Knox, Kentucky, David boarded the troop ship “Haverford Victory” at the San Francisco, California harbor and set sail under the Golden Gate Bridge to Yokohama, Japan where he served with the 1st Calvary Division as well as the 61st Field Artillery Battalion. On June 22, 1948, David was honorably discharged as a Technician Fourth Class with a World War II Victory Medal and an Army of Occupation Medal-Japan. During his time in Japan, David’s Uncle Jim Schuyler convinced David to pursue studies as a Civil Engineer instead of as a Forest Ranger. On August 13, 1948, David packed his Army duffel bag along with his GI handbag and took the train to Princeton, New Jersey after being accepted into the Princeton University College of Engineering. He graduated in 1952 with a Bachelor of Science degree in Civil Engineering and was the President of Terrace Club his senior year. David began his career as a Field Superintendent for Raymond Concrete Pile Company from 1952-1955 in New Jersey. During those three years, he completed 37 projects in 37 different New Jersey cities. For the next 15 years (1955-1970), David was employed as an engineer in the energy industry for Consorcio Raymond-Brown & Root in Maracaibo, Venezuela. It was in Maracaibo, Venezuela where David met the love of his life, Lois Wing, who was teaching in the American School. Lois and David were married June 13, 1959 in Syracuse, New York; however, they continued to live in Maracaibo, Venezuela for the next 12 years. While in Venezuela, David was active in the North American Association of Venezuela (the Zulia Section) and served as President from 1962-1963. In 1970, David was awarded the Diploma de Honor by the Ministerio de Educacion. Also in 1970, David was promoted to Vice President of Raymond International, Inc. and returned to the United States with wife, Lois, and their two children, Mara Louise and David Andrew. Residing in Princeton, New Jersey, David commuted daily to the main office in New York City until being transferred to Raymond’s headquarters in Houston, Texas (1972-1980). During this time, David traveled to over 30 foreign countries. David’s second career began in 1980, when he joined Exxon Production Research Company and participated in many challenging projects in Norway, Egypt, China, England and Kuala Lumpur. Just prior to his retirement on August 28, 1995, David worked with new technology in Exxon Training and Course Development. Following retirement, David and his wife Lois became active members in the Exxon MAC Annuitant Club, where he served as President for 6 years and as Treasurer for 16 years. David and Lois thoroughly enjoyed the luncheons and tours with fellow Exxon employees and their families. David was a member of the Society of Petroleum Engineers (SPE) since 1964; acting as SPE’s Continuing Education Chairman from 1989-1993 and SPE’s Gulf Coast Director from 1994-1995. David was a member of The Moles and a Professional Engineer in the State of Texas since 1980. He was very active with the Princeton Alumni Association of Houston (PAAH). David and his daughter, Mara Smith Burpeau, also a graduate of Princeton University (Class of 1988) worked together for Princeton University Annual Giving in the City of Houston, Texas. In 2003, David was presented with Princeton’s Jerry Horton ’42 Award for his fundraising efforts on behalf of the Houston Annual Giving Committee. David organized several mini-reunions for his Class of 1952 notably in Maine, Massachusetts (Sandwich and Plymouth Rock), and Texas (San Antonio and Fredericksburg). David was active in the Yorkshire Civic Association from 1978-1997, as President for two years (1979-80) and Head of Maintenance for 16 years (1981-1997). David was an active member at Memorial Drive United Methodist Church (MDUMC), serving as an usher from 1972-2020, and as a Coach and Assistant Coach to his son’s (David Andrew) MDUMC soccer teams. He was a member of the Men’s Garden Club of Houston. David enjoyed many hobbies such as photography, tending to his vegetable garden, working in his yard, swimming in his backyard pool, weekly golf outings with friends and square dancing with Lois in the Houston Square and Round Dance Council (1996-1997). David is proceeded in death by his parents, Louisa Kingman and Ernest DeAlton Smith; and his brother Schuyler (Skip) Revis Smith all of Manlius, New York. David is survived by his beloved wife of 63 years, Lois Louise Wing Smith and their two children Mara Louise Smith Burpeau and husband Dr. John A. Burpeau of Houston, Texas; David Andrew (D.A.) Smith and wife Pamela Maurish Smith of Manvel, Texas. His six grandchildren: Sara Eileen, Julia Lois and Meredith Jane Burpeau; Nathaniel Olivier, Matthew Kingman and Emma-Kate Abigail Smith. He is also survived by his sister Jean Louisa Boor of Horseheads, New York; brother Phillip Andrew Smith and wife Lois Hotaling Smith of Manlius, New York; sister Patricia Anne Hooker of Bangor, New York along with many nieces, nephews, cousins and very good friends. A memorial service will be held Monday, April 11, 2022 at 2:00pm at Memorial Drive United Methodist Church, 12955 Memorial Drive, Houston, TX 77079. Army honors will be performed in appreciation for his military service. Visit https://www.mdumc.org/davidsmith to join the livestream of the service. Donations can be made to Memorial Drive United Methodist Church.

Visit https://www.mdumc.org/davidsmith to join the livestream of the service.

Send flowers to the Smith family.