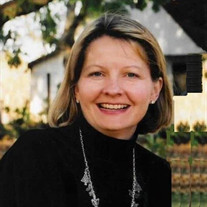 Deborah Ray Barber McNeill, 61, of Houston passed away Saturday, November 4, 2017, after a long illness. She was born October 8, 1956 in Roanoke, VA to Raymond and Anne Barber, of Portsmouth, Virginia. Deborah was preceded in death by her father, Raymond Stanley Barber, and is survived by her mother, Anne Cragin Barber. She is also survived by her husband of 32 years, Tom Peyton McNeill, III; her daughter Hayley Ray McNeill of Tuscaloosa, Alabama; sister, Dr. Tricia Barber & husband Capt. Robert Winkler of Stafford, Virginia; nieces Tess Anne Winkler of Washington, D. C. and Cragin Deborah Winkler of Alexandria, Virginia. Deborah spent her school years in Sandy Springs, Georgia and Raleigh, North Carolina and earned her Bachelor of Science from The University of Georgia. At Georgia, she was an officer of Alpha Gamma Delta sorority as well as one of the first women on The University of Georgia track and field team. Deborah earned her Master of Education from Texas A & M University. Mrs. McNeill was dedicated to the things that she loved. She was the Director of Research for the Texas A&M University Development Foundation, Regional Director for the American Heart Association, and a Development Officer for Trinity University. Mrs. McNeill was a passionate servant of God who volunteered with many non-profit organizations such as the Junior Leagues of San Antonio, Tuscaloosa, Alabama and Houston, John Paul II Catholic School, Daughters of the American Revolution, Houston Livestock Show & Rodeo Ladies Go Texan Committee, Spring Branch ISD, among others. Deborah’s commitment to Alpha Gamma Delta Sorority lasted over 40 years, from serving as the chapter advisor of the Psi chapter at the University of Alabama, to being on the AGD Foundation Board of Trustees, to serving the Houston Panhellenic Association as Coordinator of Out-of-State Recruitment. She was also a longtime member of St. John Vianney Catholic Church in Houston. Deborah loved to travel, attend musicals and ballet performances, listening to all kinds of music and singing with her daughter, and dancing – especially Texas two-stepping. She believed in seizing the day and living life to its absolute fullest. She was a dedicated, creative, caring person who enjoyed her many friends and loved her family dearly. She will be missed by all those who love her. There will be a Memorial Mass celebrated in Deborah's birthplace state of Virginia at the St. Francis of Assisi Catholic Church in Triangle, VA (Quantico) on Saturday, December 23, 2017 at 10:00 am. In lieu of flowers, donations can be made in her honor to The Susan G. Komen Breast Cancer Research Fund, Citizens for Animal Protection or the charity of your choice. 1 Corinthians 13:13 So faith, hope, and love remain, these three; but the greatest of these is love.

Deborah Ray Barber McNeill, 61, of Houston passed away Saturday, November 4, 2017, after a long illness. She was born October 8, 1956 in Roanoke, VA to Raymond and Anne Barber, of Portsmouth, Virginia. Deborah was preceded in death by her... View Obituary & Service Information

The family of Deborah Ray Barber McNeill created this Life Tributes page to make it easy to share your memories.

Send flowers to the McNeill family.