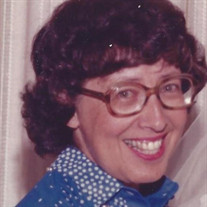 Dolores Jellison, 90, died peacefully on June 27, 2020. She was born at her grandmother’s farmhouse in Carnegie, Pennsylvania on September 18, 1929 to Ethel May and James C. Wallace. She was one of 6 children. After the depression, the family moved to Bridgeville, PA in a house built by her father. Dolores graduated from Bridgeville High School in 1947. After high school, she attended an IBM Key Punch Training Course and began working as a key punch operator for American Cyanamid Chemical Co. There she met Robert J. Jellison, a recent graduate of Duquesne University who was working as a junior accountant waiting for his orders to the United States Air Force. When Bob completed his service, they were married on February 15, 1958. Bob’s career at Pennzoil lead their moves to Oil City, PA and then to Houston, TX in 1965. Dolores was a homemaker while raising their 3 children in Sharpstown. She returned to work in the early 1970’s and continued as a key punch operator for Bernard Johnson Engineers, Inc. until her retirement in the early 1990s. Dolores was preceded in death by her husband, Bob, her parents, her brothers Jim, Warren and Tom, and her brother-in-law Frank Bentrem. She is survived by her 3 children: Michael J. Jellison, Shirley Jellison Vaughn (Lee), and Robert P. Jellison (Sabrina). She so enjoyed her 9 grandchildren: Jessica Vaughn Menefee (Thornton), Christopher Vaughn (Samantha), James Vaughn, Lindsey Jellison, Taylor Jellison, Hayley Jellison, Josette Jellison, Damian Jellison and Spencer Jellison. She was blessed with great-granddaughters Rebecca Menefee and Teagan Vaughn. Also, Dolores will be greatly missed by her sisters Peggy Bentrem, Patti McIntyre (Ellsworth), sister-in-law Martha Wallace, and many nieces and nephews. A family graveside service will be held on Wednesday, July 1, 2020. Dolores will be buried next to Bob at Houston’s Memorial Oaks Cemetery. In lieu of flowers, those desiring to do so may make contributions to Houston Hospice, 1905 Holcombe Blvd., Houston TX 77030-4123 or online at www. Houstonhospice.org; or to Parkway Place online at www.buckner.org/employeeassistance and select Parkway Place.

Dolores Jellison, 90, died peacefully on June 27, 2020. She was born at her grandmother&#8217;s farmhouse in Carnegie, Pennsylvania on September 18, 1929 to Ethel May and James C. Wallace. She was one of 6 children. After the depression, the... View Obituary & Service Information

The family of Dolores Jellison created this Life Tributes page to make it easy to share your memories.

Send flowers to the Jellison family.