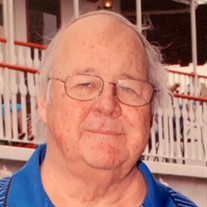 Donald William Funkhouser, age 69, passed away at the Memorial Hermann Memorial City Medical Center in Houston, Texas on December 14th, 2018. He was born on March 9th, 1949 in Columbia, Mississippi to Lawrence Funkhouser and Jean (Cooper) Funkhouser. Don moved throughout his childhood and spent time living in New Orleans, Midland, Houston, and San Francisco. Don attended Memorial High school in Houston, Texas where he was elected senior class president and scored a perfect 800 on his SAT Math test. He attended Stanford University where he graduated with a bachelor's degree in Physics and a master’s degree in Geophysics. Don worked his entire career as a geophysicist for Western Geophysical and spent time working in Houston, Mexico City, Saudi Arabia, and 8 years in London. While living in London, he met his wife, Jane (Hunter) Funkhouser. Don and Jane were married on September 6th, 1980 and moved back home to Houston, where he lived for the rest of his life. Don and Jane had two children, Jonathan and Christopher. He was passionate about computers and wrote several games in his spare time. Don was also a huge sports fan, especially baseball. He would watch the Astros, Giants, and Dodgers every day. Don is survived by his wife Jane, his father and stepmother: Lawrence Funkhouser and Jean Funkhouser, his children: Jonathan Funkhouser and Christopher Funkhouser, and his siblings: Tom Funkhouser, Dave Funkhouser, and Karen Funkhouser. A Celebration of Life Gathering will be held on Saturday, January 26th, 2019, 2:00 – 4:00 p.m. at Dettling Funeral Home, 14094 Memorial Drive, Houston, 77079.

The family of Donald "Don" William Funkhouser created this Life Tributes page to make it easy to share your memories.

Donald William Funkhouser, age 69, passed away at the Memorial...

Send flowers to the Funkhouser family.