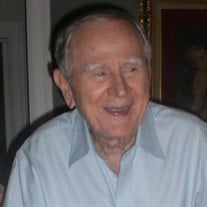 Don Fraser, born in Chicago, Illinois, was a great man with the kindest blue eyes. He passed from this earth on January 16, 2019, into eternal life. Don loved spending time with his family, active in the stock market, and rarely missed a UT... View Obituary & Service Information

The family of Donald Sherwood Fraser III created this Life Tributes page to make it easy to share your memories.

Don Fraser, born in Chicago, Illinois, was a great man with the...

Send flowers to the Fraser family.