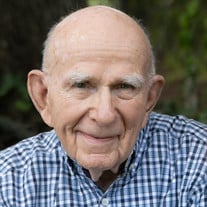 Donald George Loving passed away peacefully to be with the Lord on Friday, April 16, 2021 surrounded by his loving family. He was born on July 1, 1926 in Chicago, Illinois to George and Mae Loving. While growing up in the Cook County area of Chicago, Donald (“Bud”) worked with his dad in the family owned business, Loving Bros. Grocery. In 1944, at the age of 17 he was inducted into the US Navy and proudly served his country during WWII for approximately 2 years with tours in Biloxi, Mississippi, the Philippines, and the Pacific on a supply ship. He earned several medals of honor for his service. Upon honorable discharge from the Navy, he began pursuing a degree in business at the University of Illinois and later transferred to Michigan State University. During the summer of 1948 he met Jacqueline Ann Corey, the love of his life on the beach at Lake Michigan. They married on August 10, 1952 in her parent’s home in New Troy, Michigan. Donald frequently told us the story of how they met and that it was “love at first sight”. They were happily married for 64 years. Donald’s first job after college was with the Whirlpool Company. He spent a year working with them and then began his career with Shell Oil in the Oil Transportation and Marketing Department in 1954 in Chicago, Illinois. He and his family transferred to Houston, TX in 1970 and he continued his career with Shell Oil until he retired in 1989. In his spare time, he enjoyed vacationing yearly in St. Petersburg, FL. and Sawyer, Michigan with family, watching the Chicago Cubs games, playing tennis with his daughters and extended family members as well as doing yardwork. After retirement he enjoyed spending his time volunteering at his church, traveling to Europe to research family history, meeting up with former work colleagues at Shell breakfasts and luncheons and escaping the Texas heat by visiting their summer home in Sawyer, Michigan, near the lake. He also enjoyed spending lots of time with his 3 grandchildren of whom he was immensely proud. He had a very giving, unselfish heart and enjoyed donating to many animal, health, and religious charities. He was also a proud patriot and very proud of his country. He supported many veteran charities, monuments, and political organizations. Donald was preceded in death by his parents, George and Mae Loving, his sister Lucille Borchers, mother and father in- law Alton and Vernita Corey and his loving wife Jacqueline Corey Loving. He is survived by his daughter Lynn Loving Farmer and her husband Richard Joseph Farmer of Katy, TX, daughter Lisa Loving Allen and her husband Charles David Allen, Jr. of Trophy Club, TX and his grandchildren Cameron and Caroline Allen and Rachel Farmer. A Celebration of Life will be held Saturday, June 12, 2021 at 1pm in Houston, TX at Dettling Funeral Home located at 14094 Memorial Drive Houston, TX 77079.

Donald George Loving passed away peacefully to be with the Lord on Friday, April 16, 2021 surrounded by his loving family. He was born on July 1, 1926 in Chicago, Illinois to George and Mae Loving. While growing up in the Cook County area of... View Obituary & Service Information

The family of Donald George Loving created this Life Tributes page to make it easy to share your memories.

Donald George Loving passed away peacefully to be with the Lord...

Send flowers to the Loving family.